The use of Artificial Intelligence techniques in the network will solve problems of future network deployment and operation.

ENI focuses on improving the operator experience, using closed-loop AI mechanisms based on context-aware, metadata-driven policies. This enables the ENI system recognize and incorporate new and changed knowledge, and hence make actionable decisions. This model gives recommendations to decision-making systems, such as network control and will interact with management systems, to adjust services and resources offered based on changes in user needs, environmental conditions and business goals.

ENI has published the first version of the System Architecture and Context Aware Policy Management and three versions of the Use Cases, Requirements, two versions of the Terminology, and the Proof of Concept (PoC) Framework in Release 2. Also reports on Classification of Networks, Evaluation of Classification and Intent-based Architectures, these reports are release independent.

The System Architecture is being specified, with a new draft version 2 including a high-level architecture using details of AI decision techniques. ENI has opened new work-items to collect version 3 of the Use cases, Requirements, and terminology, and a new work item on categorization for AI application to Networks. ENI is also working on reports on the measuring of Evaluation of Classification, Intent knowledge within the Architecture and Data mechanisms, Data telemetry. Two Specifications on Mapping between ENI architecture and operational systems, also on Inference, semantics and ontologies are also being developed.

The Architecture is summarise as two control loops using AI modelling. Data Gathered is Passed via an optional API, Normalised and processed in a number of AI Analysis Functional Blocks, which may be recursive and interactive using an inner loop. The Actionable decision is then de-normalised and passed back to the network using the same optional API in reverse. 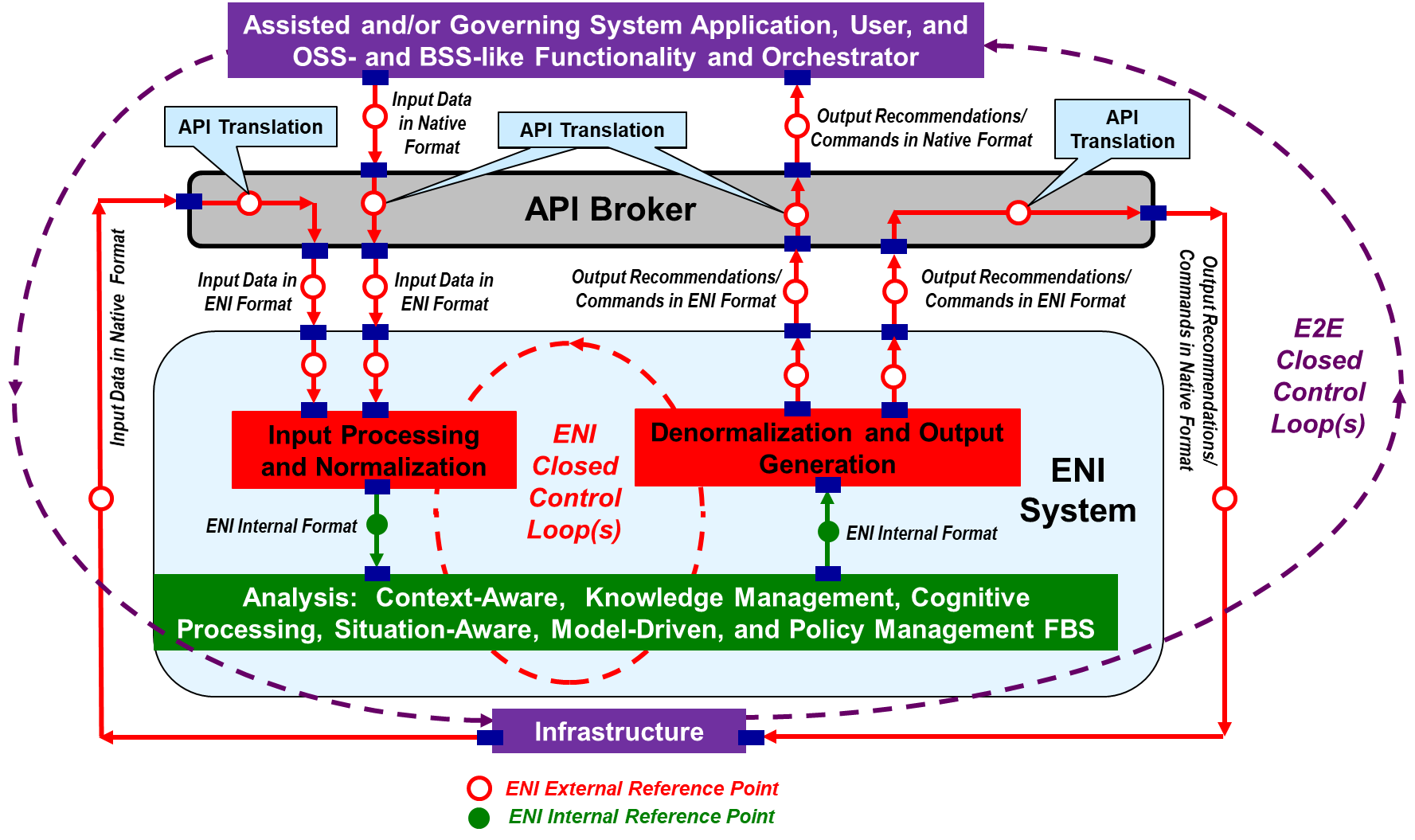 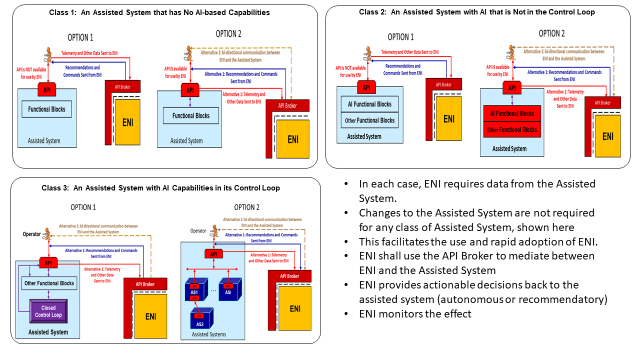 Classes and modes of operation

A full list of related specifications in the public domain is accessible via the ENI committee page.

The direct link to refer to this blog is https://www.etsi.org/newsroom/blogs/blog-eni

The ENI#18 meeting was online only as many countries were affected by travel restrictions or delegates not allowed to travel. It took place at 7-10 June 2021.

Let’s remind that the ISG is open to ETSI members and non-ETSI members alike. The different players in the value chain are welcome to join the ISG effort, contribute to the development of these key specifications and demonstrate Proofs of Concepts (PoCs). To join, please contact: [email protected]

The ETSI ENI Industry Specification Group was created in Feb 2017, today members come from operators, vendors and research institutes all over the world.

The ENI#17 meeting on 8-11 March 2021 was “online only” due to travel restrictions or delegates not allowed to travel.

The meeting was very productive and achieved significant progress. The meeting progressed the work-items to stable output on the deliverables Draft report ENI 009 on Data Processing mechanisms planned to be approved at the end of March 2021. Report ENI 008 Intent aware architecture is in publication, the Group Report on the evaluation of categories report ENI 010 is published as v1.1.1 describing measures of automation of the Classes published in 2019 in report ENI 007 v1.1.1.

An open area is approved, for all stable drafts and previously published deliverables are available.

The ENI#16 meeting on 7-10 December 2020 was "online only" due to travel restrictions or delegates not allowed to travel.

The meeting was very productive and achieved significant progress. The work-items were progressed to stable output on the deliverables Draft GR ENI 008 on Intent Aware Network Autonomicity and Draft GR ENI 009 on Data Processing mechanisms both planned to be approved at the end of December. Approval as final draft on the evaluation of categories Draft GR ENI 010 describing measures of automation of the Classes published last year in GR ENI 007 v1.1.1.

The ENI#15 meeting took place from 14-17 September 2020 "online only" as many countries were affected by travel restrictions or delegates not allowed to travel.

The meeting was very productive and achieved significant progress. It progressed the work-items drafting on the deliverables "draft GR ENI 008" on Intent Aware Network Autonomicity and "draft GR ENI 009" on Data Processing mechanisms, both planned to be approved in December. Major progress on the evaluation of categories "draft GR ENI 010" was made discussing measures of automation of the classes published last year in GR ENI 007 V1.1.1. The new draft ENI 022 on iFIT in-situ reactive telemetry framework was progressed well.

The meeting was very productive and achieved significant progress with 2nd release drafts.

An open area was approved, for all stable drafts and previously published deliverables. The meeting continued drafting within the work items for the next versions on ENI use cases, requirements and Terminology for Release 2.

Due to confinement and travel restrictions, the ENI#13 meeting was successfully organized online only on 17-20 March 2020.

A workshop “ENI-Machine Learning in communication networks” was organized on 16 March between two ETSI ISGs, namely ENI and SAI (Securing AI), and ITU-T’s Q20/13 and FG ML5G “Machine Language 5th Generation”, on AI/ML. This workshop was instrumental in enabling synergies between ETSI and the ITU-T in this field and to better understand the needs of industry. ETSI ISG ENI will send the template of ENI Use Cases to the ITU-T groups by liaison for their reference in future work.

As for the meeting, it was very productive and achieved significant progress. After the publication of the approved ENI 006 PoC framework revision, all PoCs will be required to show interworking on an external reference point. The meeting also progressed on the draft reports GR ENI 008 on Intent Aware Network Autonomicity and GR ENI 009 on Data Processing mechanisms. Major progress on the evaluation of categories in Draft GR ENI 010 was made discussing a five dimensional system of quantification of the Classes published last year in GR ENI 007.

Significant progress was made on the learning techniques for AI in the ongoing revision of ENI 005. An open area was also approved for all stable drafts and previously published deliverables. Attendees continued drafting revisions of the next versions on ENI use cases, requirements and Terminology for Release 2.
In addition, we started working on Evaluation of the AI Network Configuration and Mapping of operational systems to ENI architecture. ISG ENI is now progressing into the 2nd Release.

ETSI hosted ENI#12 meeting and Proof of Concept (PoC) Demos in its headquarters in Sophia Antipolis, France, on 9-12 December 2019. The meeting can be summarized as follows:

On 9 & 10 December there were demos of most of the completed and progressing PoCs PoC#1, 2, 3, 4, 5, 6 & 7. This generated discussions and interest with other ETSI members and participants of meetings in the ETSI HQs at the same week. Especially, delegates from Industry Specification Group (ISG) Zero-touch network and Service Management (ZSM) and Technical Committee (TC) SmartM2M. 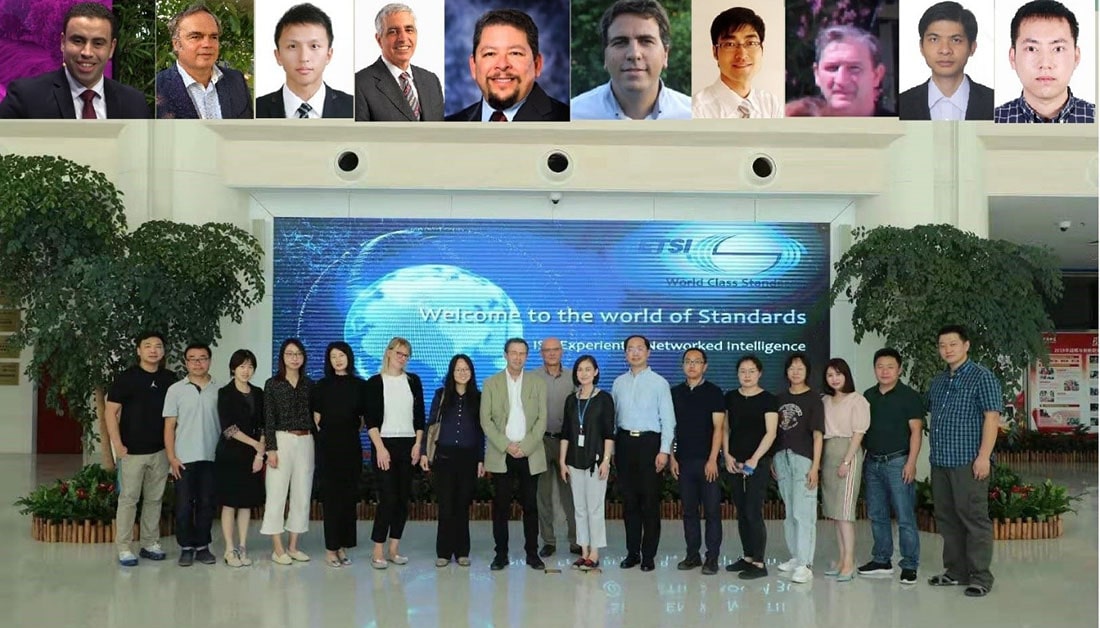 The ENI#11 meeting was hosted by China Telecommunications in the research & development labs in Beijing on 24-26 September 2019.

The ENI#10 meeting was hosted by Altice Labs / Portugal Telecom on 9-11 July, 2019, at their headquarters by the canals of Aveiro, Portugal. 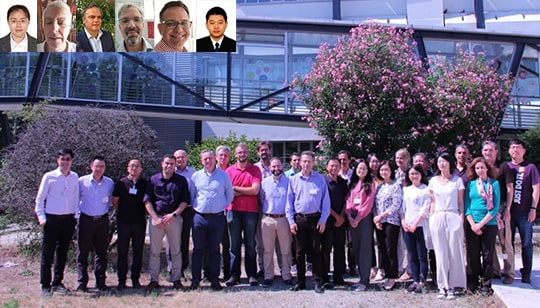 The meeting was very productive and significant progress was made. To sum it up, we finalized the work on the ENI use cases, requirements and system architecture for Release 1. As a result, the final drafts for approval of these specifications are now available and their publication is expected to take place in September. In addition, we advanced the work on the means of intent aware networks, categorization of AI within networks, including discussion on semantics around the work in Release 2.

ENI#8 was held on 3-5 December in 5Tonic labs in Madrid, hosted by UC3M (University Carlos III of Madrid) and Telefonica: the host gave a presentation of the 5tonic laboratory. Attendees included members and participants of the group including Government Ministry Institutes. It was a fruitful meeting with over 80 documents handled.

This meeting was important to discuss the ISG ENI extension terms of reference for Release 2 going into its second term. The group updated the Terms of Reference accordingly and will ask ETSI’s Director General for an extension from April 2019 to March 2021, based on the growing ongoing and future work of the group.

Over the last few years, Layer123’s SDN NFV World Congress has emerged as the best place to assess the mood and state of progressive thinking in telecom operations. So it was fitting that this year’s program included a progress report from the Experiential Networked Intelligence (ENI) Industry Specification Group (ISG) team developing a reference model for the use of AI in telecom operations.

ETSI launches new webinars on AI, Non IP Networking, Augmented Reality, and more to comeArtificial Intelligence for networks: understanding it through ETSI ENI use cases and architectureETSI publishes a white paper on Network Transformation - Building on key technologies for 5G