The European Standardization Organizations – CEN, CENELEC and ETSI – have presented the results of their joint work to prepare and develop standards that will enable the deployment of flexible and efficient electricity networks, known as 'Smart Grids'. The three organizations have confirmed that they will continue to cooperate with the European Commission, the energy industry and other stakeholders in order to disseminate these results and promote the use of the identified standards. They will also facilitate the development of any further standards that may be needed.

This Conference, which was attended by more than 60 delegates, is the latest step in a constructive and continuing dialogue between the European Commission, the ESOs, the energy industry and other stakeholders. The event was opened by Jan Panek and Anne Houtman from the European Commission (DG Energy) and Tore Trondvold, Chair of the CEN-CENELEC-ETSI Joint President’s Group.

"European Standardization has a major role to play in enabling a successful energy transition," said Mr Trondvold. "In the European Standardization Organizations, we are developing and adopting standards to support the integration of the European electricity market and the implementation of the European Union’s climate and energy package, including the so-called ‘20-20-20’ targets for greater energy efficiency, a higher share of energy from renewable sources, and a reduction in greenhouse gas emissions by 2020."

Turning to the topic of Smart Grids, Mr Trondvold said: "When we talk about Smart Grids we are not only thinking about the traditional players in the energy market, the big power producers and distribution companies, but we are also looking for new ways to empower 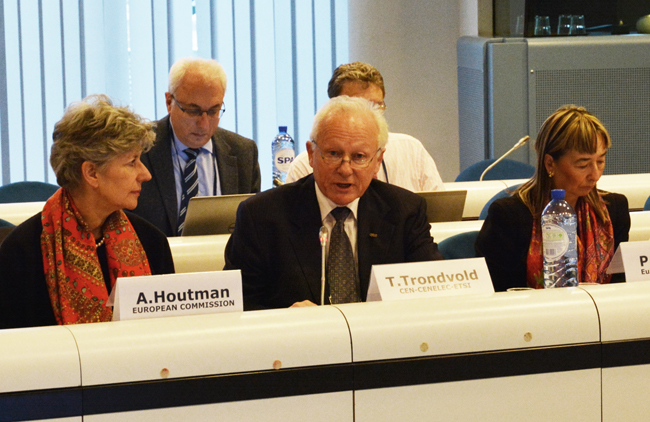 consumers. Giving consumers more control over their use of energy, and also allowing households and companies to generate electricity from renewable sources such as wind and solar power."

Representing the CEN-CENELEC-ETSI Smart Grid Coordination Group, Laurent Guise introduced the main outcomes of the work carried out by the ESOs since 2011, responding to a standardization request issued by the European Commission (EC Mandate 490). He referred to the reports produced by the ESOs in 2014 addressing various aspects of Smart Grids, noting that these reports had been welcomed with a high level of positive interest from stakeholders in the European energy industry and also from a number of international partners.

One of the main tasks that the ESOs had been asked to undertake was to prepare a set of standards that are necessary to support the implementation of Smart Grids in Europe. Mr Guise reported that a list of 534 standards had been compiled by the responsible Working Group of the SG-CG. Around 87% of these standards are already available, while the remaining ones are currently being developed by various Technical Bodies within recognized standardization organizations - either at the European level or at international level.

Referring to the close collaboration between the ESOs and the international standardization organizations (ISO, IEC and ITU), Mr Guise said that the adoption at international level of standards based on work done by European experts offers a de facto competitive advantage to European companies that want to expand their activities around the world.

During the Conference, representatives from a wide range of stakeholders welcomed the results of the work that had been undertaken by the ESOs in relation to Smart Grids. They included: João Torres, Chair of the European Distribution System Operators' Association for Smart Grids; Gerhard Seyrling, President of T&D Europe (European Association of the Electricity Transmission & Distribution Equipment and Services Industry); Andreas Umbach, President & CEO of Landis+Gyr; Konstantin Staschus, Secretary General of ENTSO-E (European Network of Transmission System Operators for Electricity); and John Ketchell (from ANEC, which represents consumer interests in standardization at European level).

Representing the European Commission, Anne Houtman (DG Energy) thanked all those involved for the successful completion of the work that had been requested under EC Mandate 490. "I’m delighted to see that the results of this Smart Grid standardization process are already widely accepted and referenced," said Ms Houtman. "I would like to thank all participants involved in the execution of Mandate 490 for their exemplary commitment to this important work."

Ms Houtman strongly urged "the relevant industries, the EU Member States, and all interested parties to make use of these standards to deploy Smart Grids. After all, this is the smart thing to do! Those doing so can keep abreast of recent developments, promote open solutions and bring benefits to consumers, businesses and the energy system as a whole."

The ESOs have agreed to continue their collaboration in relation to Smart Grids following the completion of the work under EC Mandate 490. The CEN-CENELEC-ETSI Smart Energy Grid Coordination Group (under its amended name) will further develop some details in the work already carried out, follow-up on new developments in the field of Smart Grids, and actively promote the results of its work at European and international levels.

According to Ralph Sporer, Chair of the CEN-CENELEC-ETSI Smart Grid Coordination Group: "There will be a lot of activities in the coming year, reflecting the ongoing technological developments in this important field. Thanks to the progress made during the last five years, the ESOs now have an agreed procedure and methodology to derive standardization needs in a systematic way. So I would say that standardization activities in the field of Smart Grids can now be seen as 'business as usual' for the ESOs."

In March 2011, the European Commission issued a formal request (EC Mandate 490) to the European Standardization Organizations, which was accepted by CEN, CENELEC and ETSI in June 2011. This request (mandate) set out a series of tasks to be completed, including: the development of a reference architecture, the development of sustainable and systematic standardization processes, and the elaboration of a set of consistent standards to support the implementation of Smart Grids in Europe. The mandate also highlighted the importance of security aspects, as well as interoperability aspects of Smart Grids.

In July 2011, the ESOs decided to establish the CEN-CENELEC-ETSI Smart Grid Coordination Group (SG-CG), in order to ensure that the work requested by the European Commission could be completed in an efficient manner, and with the participation of all relevant stakeholders (including experts from the energy industry, consumer representatives, regulators, etc.).

The SG-CG set up 4 Working Groups to deal with different aspects of EC Mandate 490 (methodology, a set of consistent standards, interoperability and security). Each of these Working Groups produced reports in 2012, and again at the end of 2014.