Mr. Dirk Weiler (Nokia Siemens Networks) was appointed as Chair of the General Assembly for a first term of office. Mr. Kari Marttinen (TeliaSonera AB) was appointed for a first term of office as Vice-Chair representing industry interests, and Ms. Karine Iffour (NORMAPME) was re-appointed for a second term of office as Vice-Chair representing the user category of Members. Each of the terms of office runs from December 2010 to November 2012. The rules of ETSI limit the appointment of elected GA officials to two successive terms, each of two years. This week's appointments are a consequence of the end of the previous terms having been reached.

Dirk Weiler is currently Head of Standards Management at Nokia Siemens Networks where his responsibilities include the standardization and fora membership portfolio, type approval activities and standardization policy issues. Since 2008 he has been an ETSI Board Member and Chair of the ETSI IPR Special Committee.
Dirk is a member of the ICT Standardization Policy Steering Committee of the European Commission, participates in Digital Europe's Standards & Interoperability working group and is Vice Chair of the project group "Strategic Standardization topics" in the German Industry association BITKOM.

Kari Marttinen is Director of Corporate Standardization Co-ordination for TeliaSonera AB. He is TeliaSonera's delegate to the ETSI GA, ETSI's Mobile Standards Group, the 3GPP Technical Specification Group for Service and Systems Aspects, and the GSM Association's Document Approval Group. He served as Chair of the GSM Association from 1992 to 1993 and was GSM Association Executive Committee Member from 1993 to 2002.

Karine Iffour has worked in NORMAPME (the European Office of Crafts, Trades and Small and Medium sized Enterprises for Standardization) since 2002 where she deals with various sectors, notably ICT. Karine was a member of the ETSI Board from 2003 to 2008, has been Chair of the ETSI User Group since 2004 and Vice-Chair of the ETSI GA since 2008. 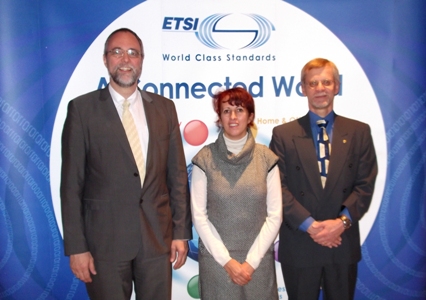