The 4th ETSI NFV PlugtestsTM event was one of the sunny June highlights in ETSI, as it took place from 3 to 7 June in Sophia Antipolis.

It was organized with the support of the ETSI Centre for Testing and Interoperability as part of the ETSI NFV Plugtests Programme. This one week event offered Network Functions Virtualisation (NFV) and Multi-access Edge Computing (MEC) solution providers as well as open source projects an opportunity to meet. NFV and MEC being key technologies for 5G, it was all the more important to assess the level of interoperability of NFV and edge solutions, while validating suppliers’ implementations of NFV and MEC specifications and APIs. 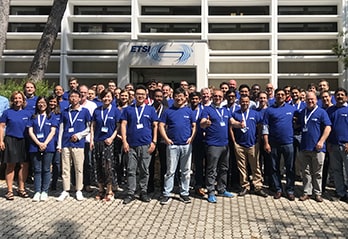 40 organizations and over 200 engineers were involved, on site and/or remotely, in the preparation of this busy event. Participating organizations were able to make their Functions Under Test interact remotely through the NFV HIVE, the Hub for Interoperability and Validation at ETSI. This hub provides a secure framework to interconnect participants’ labs and implementations and is a key element for an efficient Plugtests preparation and successful event.

The Plugtests Report outlines stable results in NFV interoperability test session, targeting both single and multi-vendor network services and a wide range of operations from on-boarding, instantiation and termination, to manual and automatic scaling from different triggers, network service updates, as well as fault and performance management.

For the first time in a Plugtests, sessions included Virtual Network Function Managers (VNFMs) and NFV Orchestrators (NFVOs) from different providers. This new type of sessions showed very positive results for operations such as on-boarding, instantiation, manual scaling and termination and led to important findings in several NFV specifications.

Another first was the MEC interoperability test sessions. The experimental MEC track covered testing in routing, application lifecycle and MEC API. This was an excellent exercise to create awareness and discuss MEC APIs, and MEC-in-NFV specifications among the NFV community.

In addition, a significant progress in NFV API Conformance Testing coverage and results was made, building on the success and learnings of the remote NFV API Plugtests run 2 months before:  the onsite event allowed to run more test sessions and obtain higher execution and success rates than the two months and a half of remote event. The tests allowed to identify and fix 25 new issues on the NFV API Conformance Robot Test Suites.

Once again, the ETSI interoperability event allowed to validate and identify improvements to include in current and future NFV and MEC specifications, open APIs and test plans. It was also a timely opportunity to finalize and validate ETSI Open Source MANO (OSM) Release SIX right before its launch.

The report is available

on the ETSI Portal.