On 4 April, during the 69th General Assembly, ETSI awarded three ETSI Fellowship awards to Frede Ask, Nuno Encarnação and John Phillips. All three awards were granted in recognition of outstanding contribution to the work of ETSI. 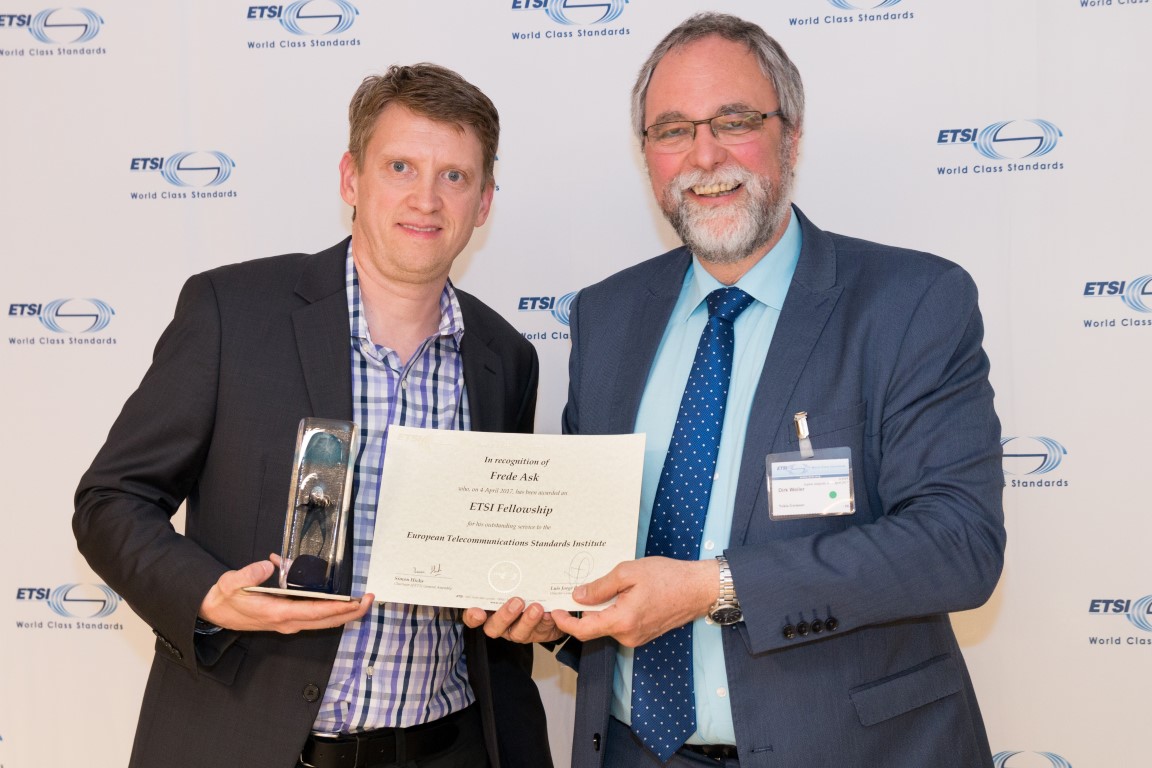 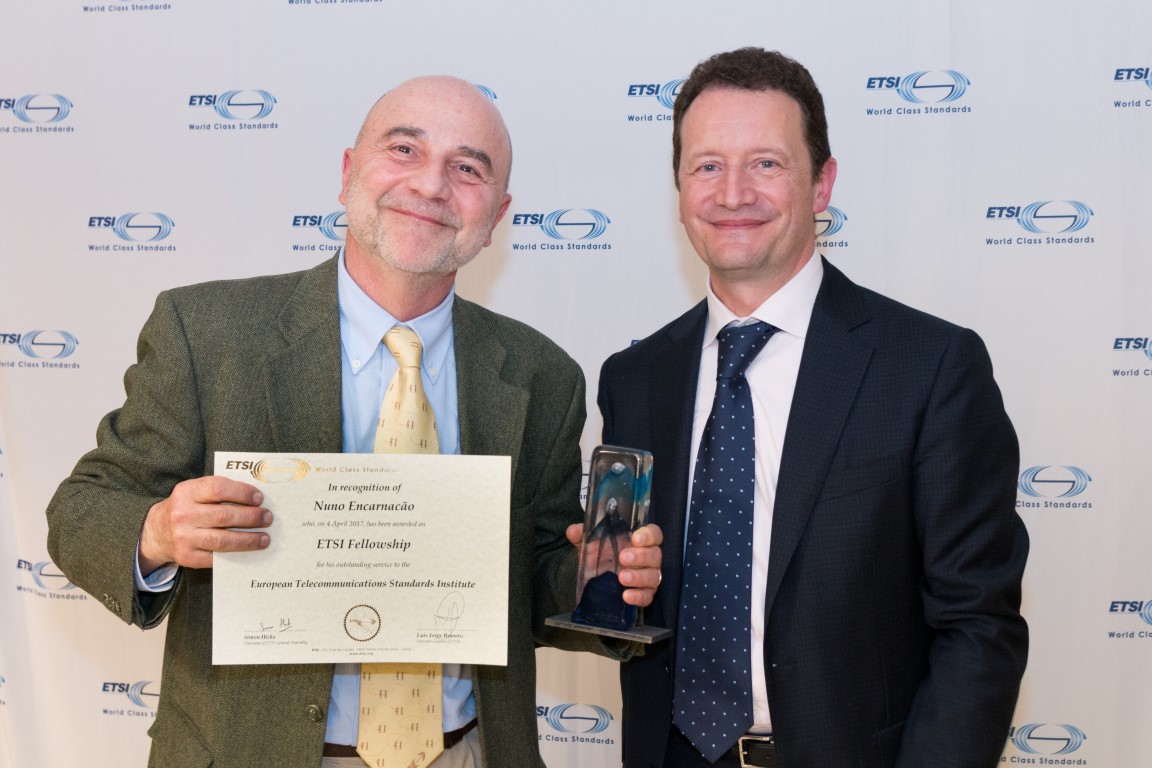 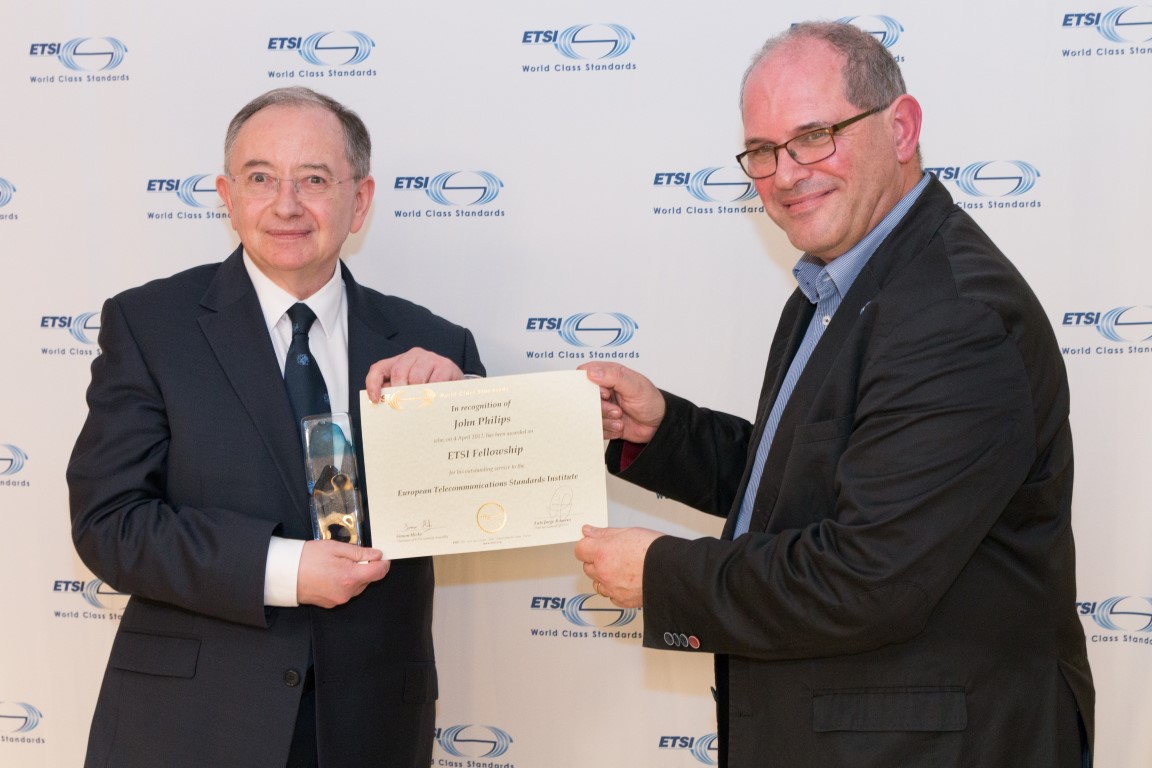 Frede Ask was elected in 1988 as ETSI Deputy Director, and served in that capacity and Deputy Director General until his retirement in 1996. Frede was also ETSI’s legal advisor, secretary to the ETSI IPR Steering Committee and was instrumental in shaping the IPR policy of the Institute at its beginnings. Thanks to his negotiation with the European Commission, he helped achieve recognition of ETSI as an official European Standards Organization, alongside CEN and CENELEC. Frede Ask is fondly remembered as a great personality and as one of the individuals who helped define what ETSI is. This award, granted posthumously, was received by Frede’s son Henrik Ask on his behalf.

Nuno Encarnação has participated in ETSI since 1992. From 1997 to 2000 he served as chairman of the Analogue Terminals and Access committee, and then as chairman of the Access and Terminals committee until 2006. He led the development of a range of TBR specifications for regulatory requirements for fixed network access, and later the Harmonised Standards under the Radio & Telecommunications Terminal Equipment (R&TTE) Directive. These included in particular TBR 21 for analogue non-voice access requirements. From 1999 to 2006 he was vice-chair of the ETSI group coordinating the implementation of the range of Harmonised Standards required for the R&TTE Directive. As chairman of TC AT Nuno also oversaw the introduction of cable network standardization at ETSI, which has now resulted in the creation of a dedicated committee, TC Cable.

John Phillips has been active in ETSI since 1989 through different leadership, technical and strategic roles. As the Chairman of ETSI General Assembly from 2006 to 2010 he led ETSI through a number of changes, putting in place the financial reporting structure and contributed to the EC’s Future Landscape of European Standardization. He also served as vice-chair of the General Assembly from 2002 to 2006 and as a member of the ETSI Board from 1999 to 2006.

The ETSI Fellowship programme rewards individuals who have made an outstanding personal contribution to ETSI, to building the work of ETSI, or raising its reputation in specific sectors of standardization. Any individual representative of an ETSI member may propose a candidate for an ETSI Fellowship. Fellowships are awarded each year by an Award Committee composed of the ETSI General Assembly chairman and vice-chairmen, the ETSI Board chairman and the ETSI Director General.