ETSI’s HbbTV 2.0.1 standard implemented in the UK and Italy

The newly published ETSI specification TS 102 796 V1.4.1 on hybrid broadcast broadband TV (HbbTV) will allow the United Kingdom and Italy to implement the latest technologies in their receivers. 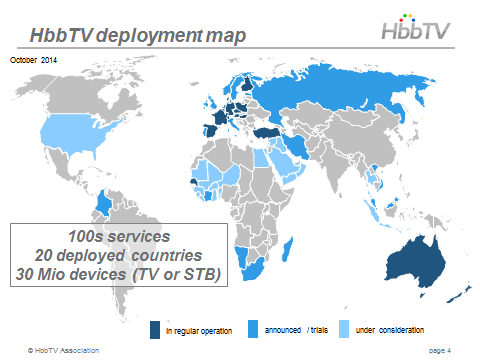 With the large installed base of receivers in the UK and Italy, there will be a transitional period where broadcasters will provide apps and services in both the old (respectively MHEG and MHP) and new formats, before manufacturers gradually upgrade their equipment to provide full HbbTV support in 2017.

“Having the UK and Italy switch to HbbTV is a big step for the broadcasting sector. It shows how the whole industry can move forward and benefit from the economies of scale with a single standard“ says Simon Fell, chair of ETSI joint Technical Committee Broadcast. "We hope more and more countries will implement HbbTV specifications.”

Having started in France and Germany, with TNT 2.0 in France, HbbTV is now a global success with over 20 countries using hybrid broadcast broadband TV services, 250 apps deployed and 300 million powered devices. HbbTV allows broadcasters to include advanced interactive services and Internet applications such as information services, catch-up services, video-on-demand, electronic programme guide, and interactive advertising. Users can access these services through connected TVs, set-top boxes, and through the connection with a companion screen, on smart phones, computers and tablets. Products and services using the HbbTV standard can operate over different DVB broadcasting technologies, such as satellite, cable, or terrestrial networks.