The COVID-19 pandemic stopped ETSI NFV Industry Specification Group (ISG) face-to-face meetings for more than two years. As a result, the ISG blog posts for the plenary sessions were interrupted as well. Although people have been used to regarding online meetings as normal in the past two years, it is time now to call people back to face-to-face meetings with the gradual relaxation of epidemic prevention policies in many countries.

This time, the ETSI ISG NFV met again at NFV#38 from May 30th to June 3rd 2022, in Sophia Antipolis, France. The meeting took a hybrid format, ETSI headquarters hosted 23 delegates from Europe, Asia and North America. Many other delegates participated in the meeting remotely due to their inability to travel. This is the first time that ETSI NFV has returned to a face-to-face meeting after the COVID-19 pandemic since 2020. 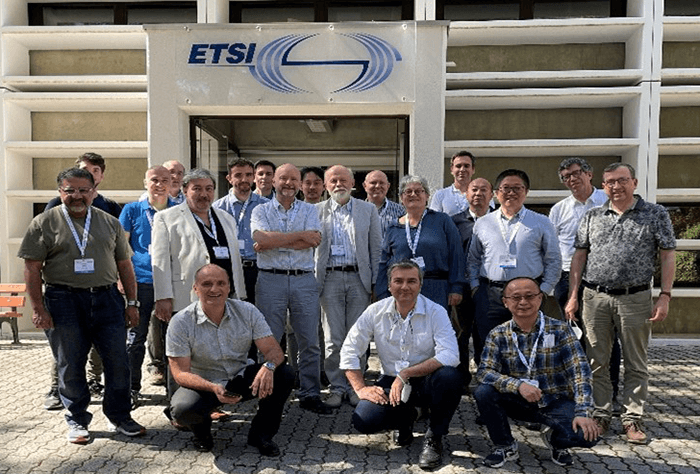 This meeting reviewed the status of the NFV Release 4 and 5 work items and promoted the development progress of the relevant group specification and reports.

In the opening plenary, Bruno Chatras, the ISG chair, shared his current perspective on how the ISG NFV mission with regards to interoperability is impacted by the evolution of the industry ecosystem and the cloud-native movement.

Based on the observation of recent industry initiatives such as the ONAP Application Service Descriptor (ASD) and Linux Foundation Nephio project, proposals were put forward for the future ETSI NFV standards. Some of the proposals included creating a series of study items on improving VNF/NS management APIs and their descriptor models with regards to applying cloud-native principles and absorbing fresh ideas from open source communities to integrate them into the NFV framework in a backwards-compatible way.

In the closing plenary, Diego Lopez, the ISG NFV Network Operators Council (NOC) chair, provided insights from operators on the industry fragmentation in the cloud-native evolution and key questions to be addressed by the ISG. 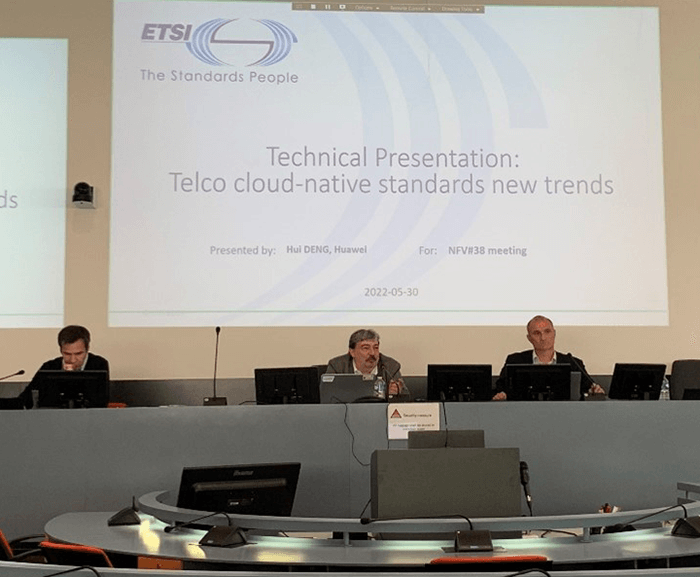 Another major result of this plenary meeting is the completion of the following specifications:

These documents will be submitted for approval by Remote Consensus, along with an additional set of specifications to be finalized during the coming weeks to complete the NFV-MANO API enhancements to support containerized VNF management and other feature enhancements related to "SDN-based networking", "NS feasibility check", "data flow mirroring", "invariant identification of NSD constituents" and "flexible and scalable VNF/NS instantiation".

Release 4 DGS/NFV-IFA036 on CIS cluster management requirements specification and DGS/NFV-SOL018 on profiling specification of protocol and data model solutions for OS container management and orchestration, as well as Release 5 DGR/NFV-IFA039 on architectural framework report on Service Based Architecture (SBA) design are quite approaching the stable draft status in this meeting.

As usual, anyone (e.g., developers, providers, operators, etc.) can access working drafts of ISG documents according to the policy that the ETSI NFV has followed to make publicly available not only published deliverables but also ongoing drafts. All drafts are available on the ETSI NFV Open Area.

Although ETSI ISG NFV still faces many challenges to fully resuming face-to-face meetings for this year, the delegates present at the meeting venue were happy to meet each other again at the ETSI headquarters and are now looking forward to the return of other fellow delegates at the upcoming ISG meetings. The ETSI NFV#38 meeting is a good starting point, and we hope that face-to-face meetings will become the norm again in the post-pandemic era.

The second half of 2022 will likely be a busy yet exciting moment for the ISG. The start of discussions on Release 6 future work is expected to occur in September during the NFV#39 meeting. And towards the end of the year, around the NFV#40 meeting, the group will hold an important milestone event, the 10th-anniversary celebration of the ETSI ISG NFV. Considering these two very important events, we expect more representatives to reunite to discuss the future of the telco cloud industry and the goals of the ISG for the next decade.