The ETSI NFV community met for its twenty ninth plenary meeting (NFV#29) from 17 to 21 February at the Home of NFV, ETSI Headquarters, in Sophia-Antipolis, France. This time, the plenary meeting took place amidst the unfortunate situation, the Coronavirus outbreak that has hit so many countries and seriously impacted standardization work, and life in general almost worldwide. Consequently, some of our delegates were not able to travel and attend the meeting physically. Our best wishes to all of you all around the world who have been impacted by the outbreak, "wishing you a good and quick recovery".

Addressing the impact of this outbreak on the handling of the plenary meeting, ETSI provided outstanding support, as usual, by enabling remote access for participants that could not travel. Furthermore, the ISG and working group officials made a very good job of adapting the schedule and working procedures to facilitate the active participation and contributions of the remote delegates. As for those of us that had the opportunity to attend the plenary physically, ETSI had provided a very useful new facility: the delegates participating F2F could check-in for the first time by scanning their meeting QR code using a check-in station in the ETSI lobby. 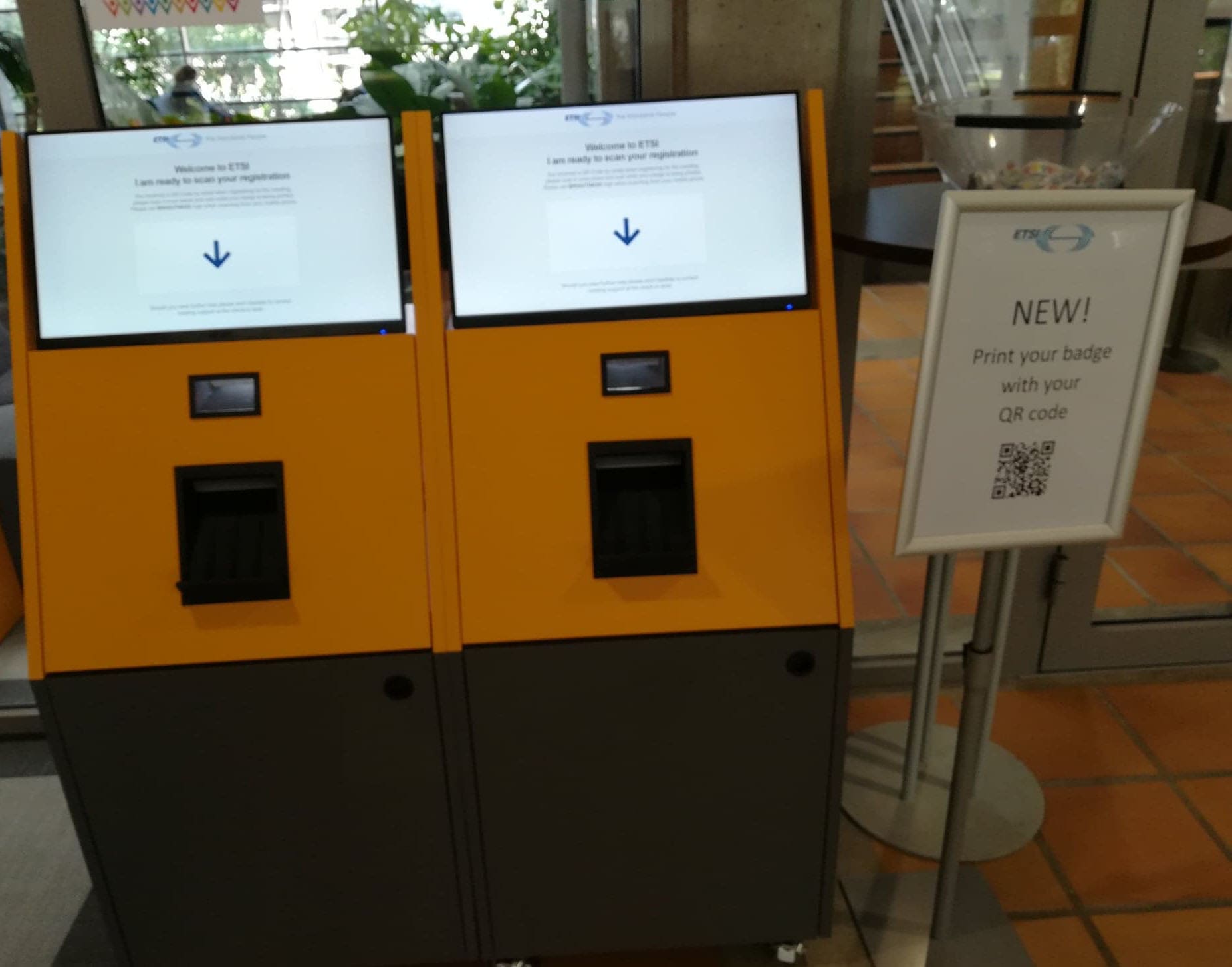 All in all, despite the circumstances, the plenary meeting was once again a success. All working groups made steady progress in most of the work items that are currently being developed as part of the Releases 3 and 4.

With regards to Release 4 work, Marcus Brunner (Swisscom), chair of the Network Operators Council (NOC) provided additional input from the network operators at the closing plenary. Some of the discussion points concerned the direction in which the specification of the cloud-native capabilities in NFV is being performed, including containers and Platform-as-a-Service (PaaS). On behalf of the NOC, Marcus also highlighted the importance of deeply embracing more efficient CI/CD and software upgrade mechanisms to cope with the challenges that operators are having for integrating and maintaining current and future NFV deployments. The plenary welcomed the input from the operator community and acknowledged the need for the ETSI NFV to stay focused and address the challenges with diligence.

A couple of weeks after this meeting, ETSI published a brand new animated video explaining the importance of virtualizing network functions in just two minutes.

As ETSI NFV has done on previous occasions, there was an evening session. This time the topic was not about ETSI NFV work program matters, or discussions specific to NFV technologies. Instead, colleagues from ETSI CTI introduced the new working methods and tools that ETSI are preparing to make the development of the specifications more agile. A demo enabled the delegates to see the already advanced development status of these tools. Several ETSI NFV delegates provided their feedback, which was also greatly welcomed by the presenters. As a matter of fact, several working groups in the ETSI NFV already make use of agile and software development tools while performing their work. I would say that the ETSI NFV has been a pioneer in ETSI in making use of version control, code development and bug tracking tools.

In terms of technical work progress and approvals, it is worth reporting about the following items:

Furthermore, the intensive work over the past few months materialized in some outstanding results. Since the NFV#28 plenary meeting in Fukuoka, Japan, in December last year, 14 documents had been published, many of them concerning the maintenance done on the Release 2 NFV-SOL, NFV-SEC and NFV-TST specifications, among others.

With regards to Release 4 work items, progress was made on stabilizing parts of the feature about "cloud-native VNF support", more specifically, with the DGS/NFV-IFA040 work item. This work item deals with the specification of requirements for the "OS container NFV-MANO service interfaces". However, despite the progress made so far, it was acknowledged by the Technical Steering Committee (TSC), that a first drop of specifications for the first quarter of 2020 was too challenging. In this respect, it was agreed to delay the first drop of normative work of Release 4 and be delivered towards mid-2020. For any of you who might be interested in learning more about what features ETSI NFV is working on as part of Release 4, I’m happy to announce that at this plenary meeting the TSC also released the first version of the "Release 4 Definition" document, which is publicly available on the ETSI NFV Open Area.

As for Release 3, the NFV-SOL (Solutions) WG worked very hard to continue the specification of protocol and data models for a first set of Release 3 features, in which special emphasis was put on the set of features that are expected to be completed first, such as:

The specifications are expected to be finalized in the coming months, which will be further complemented by other Release 3 features in the specification pipeline later in the year. These will come as additions to the protocols and data models for features such as "NFV-MANO management" and "NS across multiple domains", which had been completed with the publication of the ETSI GS NFV-SOL 009 and ETSI GS NFV-SOL 011 specifications.

As usual, anyone (e.g., developers, providers, operators, etc.) can access working drafts of ISG documents according to the open policy that the ETSI NFV has followed. All drafts are available on the ETSI NFV Open Area.

There have not been elections in ETSI NFV for some time. This changed at NFV#29, at which Julien Maisonneuve (Nokia) and Ulrich Kleber (Huawei) were re-elected and appointed as Chair and Vice-Chair of the EVE working group, respectively. My sincere gratitude for stepping up and helping the whole NFV community with your activities and support! Congratulations!

Concluding with this blogpost, it is worth looking backwards and seeing what the ETSI NFV community has achieved. NFV#29 was just the first plenary meeting of 2020, a year in which the ETSI NFV will dive into an exciting work program. Release 3 and 4 technical work focuses on several key features that are envisioned to help network operators, infrastructure, platform and VNF providers make NFV even more mainstream into operator’s networks. External factors, such as the recent virus outbreak will make handling the work program even more challenging, but the ETSI NFV is a truly outstanding community of experts and contributors, and I’m confident that we will deliver. Yes, we can make it!