Repositioning for success at ETSI NFV#7

New leadership, renewed charter, and an enhanced structure to facilitate the transition from requirements to implementation

The future of ICT may learn from the past

Wandering through the Computer History Museum in Mountain View (at the social gathering of the ETSI Network Functions Virtualisation Industry Specification Group - ETSI NFV ISG), was like a trip down memory lane.

International Business Machines (IBM) mainframes (e.g., 360/370, which I spent many a night working on at the University of Missouri in the 1970s), Digital Equipment Corporation (DEC) minicomputers (I was a systems manager for the PDP-11 and VAX-11/780 at McDonnell Douglas in the 1980s), and a slew of computers, calculators, and gadgets whose manufacturers have faded from memory.

But in an austere exhibit rests the system that truly changed the world - the IBM PC.
Aside from its size, price point, and design, what made the PC different was IBM’s decision to open up the platform, decoupling the software from hardware, publishing open specifications, fostering the greatest ecosystem the world has ever known.

Three decades later, networking and telecommunications are bracing for a major transformation as communications platforms prepare to be opened by Software Defined Networking and Network Functions Virtualization, with similar impact to the opening of the computing world.

The 7th meeting of the ETSI NFV ISG was co-hosted by Ericsson and Citrix in the Santa Clara Convention Center, whose warm hospitality, comfortable surroundings, and ideal weather made for a highly successful meeting. 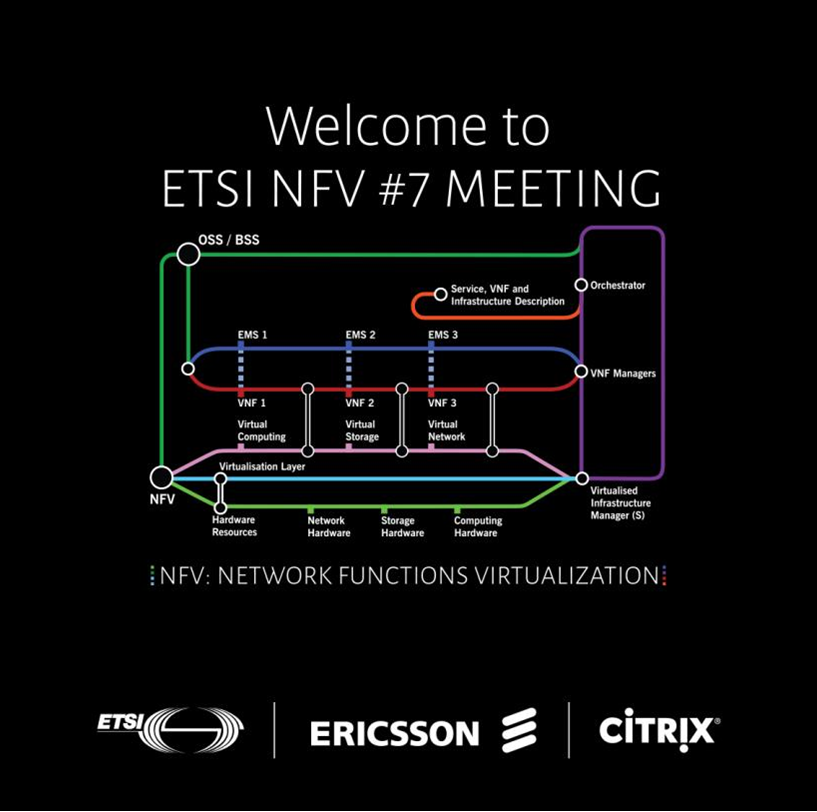 New leadership for the next phase

Over the past year-and-a-half, the ISG has grown beyond the capability of all but the largest corporate facilities:

NFV #7 marked the last meeting for the Chair (Prodip Sen (HP)) and Vice Chair (Uwe Michel (Deutsche Telekom)), who played a major role in the ISG’s growth and success to date.

Throughout NFV #7, the ISG focused on repositioning the organization for long-term success, an initiative loosely referred to as NFV Phase 2. Among the key outcomes:

Open elections were held for the NFV ISG Chair and Vice-Chair, who recently stepped down from their posts at the previous meeting in May.

Outgoing Chair Prodip Sen commented "Serving as a founding member and the first chair of the NFV ISG has been an extremely rewarding experience. We started out to create momentum in the industry, and provide guidance on the way forward to the vision. We have achieved these goals, but clearly much still needs to be done. The good thing is that with this global team we have created, there is no dearth of ideas and participation. I am fully confident that the new leadership will continue our positive trajectory towards long-term success."

Outgoing Vice-Chair Uwe Michel stated “When we started the NFV ISG back in 2012, we did not envision such rapid growth and enthusiastic validation. I feel fortunate to be able to work with such a strong leadership team, who are truly committed to achieving an industry vision for NFV.”

Steven Wright, AT&T, who formerly led the NFV Infrastructure (INF) working group, was elected the new NFV ISG chair. "I am excited to guide the NFV ISG as we transition our focus from requirements to implementations. I would also like to thank Prodip Sen and Uwe Michel for their leadership and significant contributions, which have been instrumental to our success."

Tetsuya Nakamura, NTT DOCOMO, who formerly was the Assistant Technical Manager of the NFV Technical Steering Committee (TSC) and Chair of the Software Architecture (SWA) working group, was elected the new NFV ISG Vice-Chair. "I am honored to be elected vice chair of the NFV ISG at such a critical time, as the ISG repositions itself to focus on adoption. We are especially appreciative of my predecessor Uwe Michel, who has been a major part of our success from the beginning."

The ISG continues to make solid progress on the NFV Release 1 baseline. Eleven new deliverables from multiple working groups were made available for public reviews. A liaison statement was approved to invite comments from the many NFV ISG liaisons.

“I continue to be pleased with our progress towards NFV release 1, which is targeted towards December”, stated Diego Lopez (Telefonica), NFV Technical Manager and Chair of the NFV Technical Steering Committee. “Each of our technical working groups is making tremendous progress as we worked towards a solid technical baseline, which is critical as NFV Phase 2 gets underway.”

Another major topic discussed at NFV #7 was the future of NFV ISG, referred to as ‘NFV Phase 2’. The original charter for the ISG, approved in late 2012, is scheduled to expire in January, 2014. Prodip Sen led a robust evening discussion on the future of NFV, assisted by Klaus Martiny, Vice-Chair, Network Operator Council (NOC) and incoming Steven Wright.

The NFV ISG’s mission is to facilitate the industry transformation and development of an open, interoperable, ecosystem through specification, implementation and deployment experience. . .

“Interoperability is a key objective for Network Operators”, commented Don Clarke (CableLabs), Chair of the NFV NOC. “In the next phase we intend to intensify our efforts towards achieving interoperability for NFV, which includes normative work where appropriate, formalized dialogue with other industry and standards organizations including open source communities, and a continued emphasis on encouraging open NFV implementations and Proof of Concepts.”

At the closing plenary, the new ISG leadership invited the NFV ISG plenary to proactively contribute to the future of NFV, through comments on our documents, proposals for new work items, and recommendations on the organizational structure to position the NFV ISG for long-term success.

While progress since the formation of the ISG (4Q2012) has been tremendous, there is a long way to go. The ISG will be shifting their focus outward, reaching out to the standards bodies, industry groups, and open source projects, to influence their future work programs. A proposal was shared to stimulate discussion on how the NFV ISG can engage with the research community, to leverage their innovations, resources, and ongoing work as well as to create new academic courses to train a new generation of students to be multi-skilled in networks and software. In today’s environment, collaboration is the norm, implementations the target, and speed trumps completeness.

The next meeting of the ETSI NFV ISG (NFV #8) will be held from Nov 17-21 in Chandler, AZ (outside of Phoenix). At that time, the new leadership will assume their responsibilities, and decisions are anticipated on the plan for NFV Phase 2. 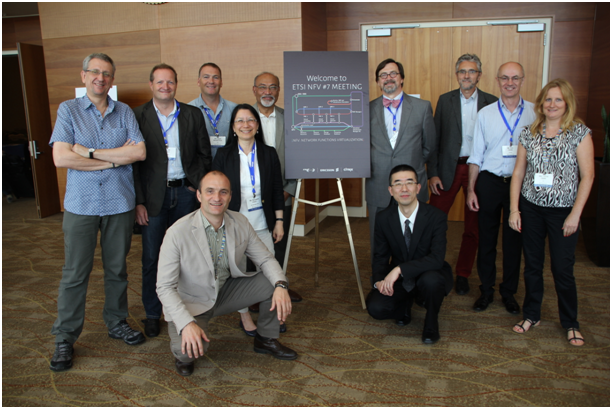 Tweet
Main players provide feedback at NFV#7 – videos on...
How NFV changes the business of telecoms