NFV#13 took place on 16-19 February in Dublin, Ireland at the impressive Croke Park stadium, the fourth largest stadium in Europe.

Thanks to the hosts Cobham Wireless and the sponsors OPENET, ETSI NFV ISG members were treated to a pre-event workshop on Monday 15 February that covered the state of the art of NFV initiatives, with presentations from Intel, Telefonica, Luxoft, Stratus Technologies and EANTC.

The week that followed was certainly intense for the 210 delegates – although the work was somewhat balanced by a very pleasant social event in the Croke Park Player’s Lounge.

NFV#13 was an important milestone for the ETSI NFV ISG community and marked the start of the fourth year of work. However despite the maturity of the project, there is little sign of a decrease in energy or activity with 29 New Work Items being proposed, of which 17 were immediately approved and added to the ongoing NFV work programme as a kick-off of Release 3 at the end of this year. The 12 remaining new work items required more time for discussion.

The creation of a new Working Group (WG) to examine NFV solutions was also proposed in order to adapt the structure of the ISG to the evolution of the standards development and priorities of the industry. In order to correctly scope this important group an ISG-wide conference call will take place on 7 April with the additional purpose of reaching agreement on the remaining new work items.

3 final draft specifications were approved for publication and 9 others were WG approved and submitted to remote approval immediately after the meeting.

As usual the IFA WG was very busy and the Security WG appreciated a demonstration on SECURED by Professor Antonio Lioy & Marco Vallini from the Polytechnic of Turin. REL WG completed its work for Phase 2 and has now begun work on 3 new pieces of work. 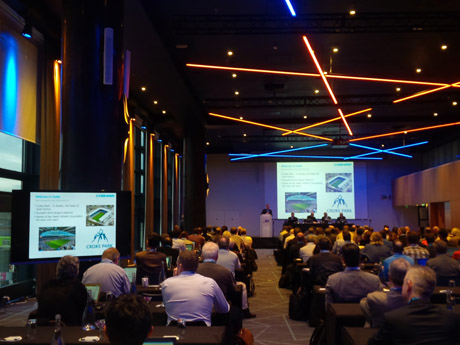 The 3 tutorial sessions (1 advanced + 2 beginners) organized by the ETSI Secretariat were well attended. The aim being to provide delegates with the required skills to write high quality specifications, with clear, well formulated and unambiguous requirements.

Last but not least, Marie-Paule Odini, (HPE) ISG NFV Vice-Chair & TST WG Vice-Chair, initiated a new ‘Women in NFV’ community to encourage more dialogue between women both in and out of the meetings.

Tweet
ETSI NFV Announcement on the Evolution of Its Rele...
Transforming the mobile-broadband experience is no...