ETSI NFV ISG leadership weighs in on the state of NFV

The fifth meeting of the ETSI Network Functions Virtualization Industry Specification Group (ETSI NFV ISG) marked the one year anniversary of NFV, and a significant turning point for the organization.

ETSI members and delegates descended upon one of the oldest, and southernmost large cities in Europe- Malaga, Spain for NFV#5, as the NFV ISG took another step towards implementation. Interest in NFV remains sky high; meeting participation was capped at 250, and over-subscribed, for the capacity of the venue.

Way back in January, 2013, a group of NFV visionaries of 60 organizations, held the first meeting of the ISG at ETSI HQ on the Cote d’Azur. Since that time, the ISG has made considerable progress:

During this week significant technical progress was made as well as in release planning.
The plenary approved a plan which indicates the initial NFV release by the end of 2014. The release includes a consistent set of baseline deliverables (see figure below for the release plan). 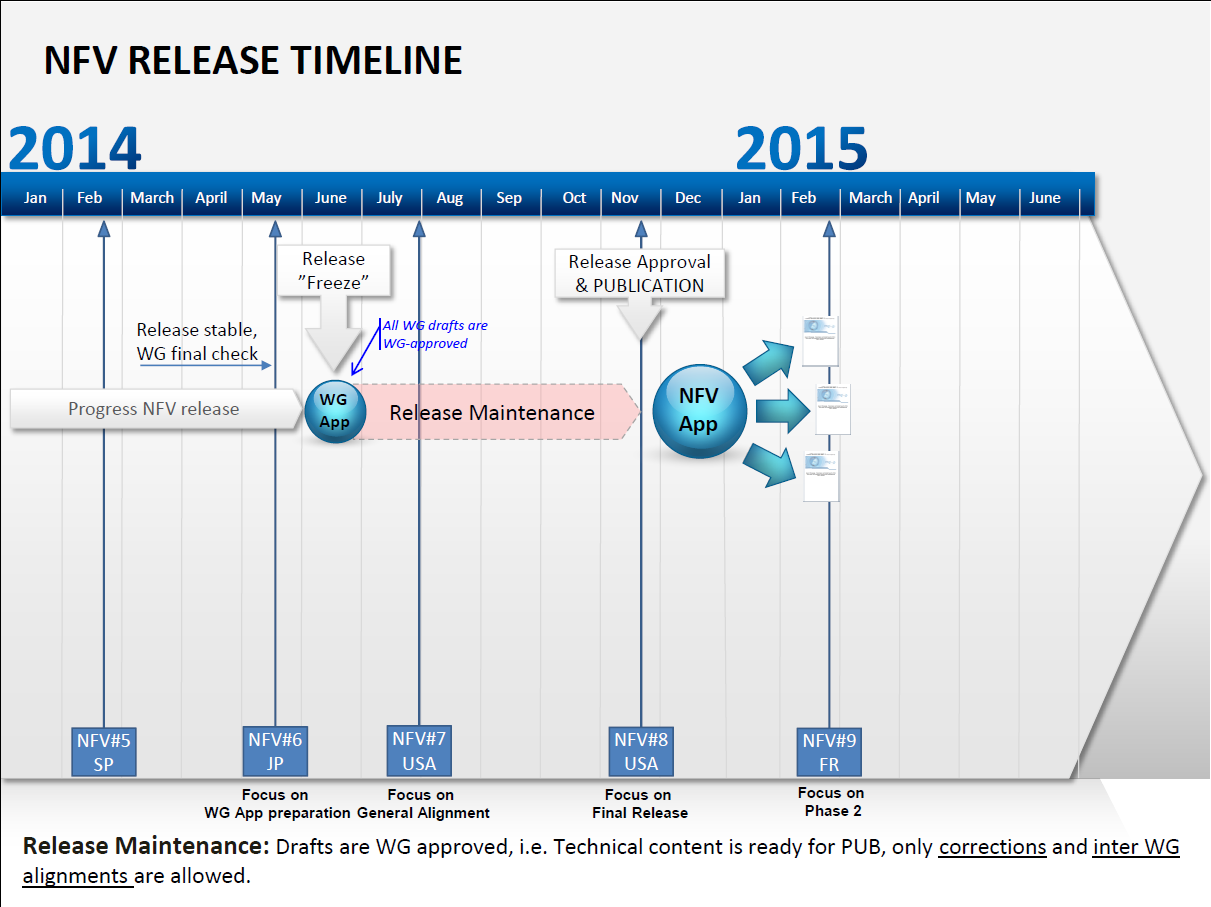 ETSI NFV ISG Chair Prodip Sen (Verizon) said: "It is hard to believe that it's only a year since we started this effort , and that in this year we now have solutions consistent with our approach, and have generated multi-vendor interoperability efforts spanning many of the use cases we have specified. The degree of collaboration in this forum is unprecedented, and is helping us rapidly realize the NFV vision."

As Marco Stura (Ooredoo) representing the latest operator to the join NFV ISG commented: "NFV is offering the framework and tools to greater improve operational efficiency and lower the costs for deploying network services going forward. Ooredoo recognize the importance of NFV and we are proud to be the first Middle East Group to join ETSI NFV ISG."

Following the global call for Proof of Concept in July, 2013, the NFV ISG has accepted 9 Proofs of Concept, spanning over half of the

NFV Use Cases defined by the ISG.

These PoCs exemplify the transition of the NFV ISG from specification to implementation. Each PoC consists of multi-vendor teams including at least one operator, and multiple NFV technology providers, including hardware, software, and silicon vendors. The NFV ISG encourages interested parties to submit new PoC proposals based on the freely available PoC framework. Table I below summarizes the NFV PoCs accepted by the NFV ISG to date. 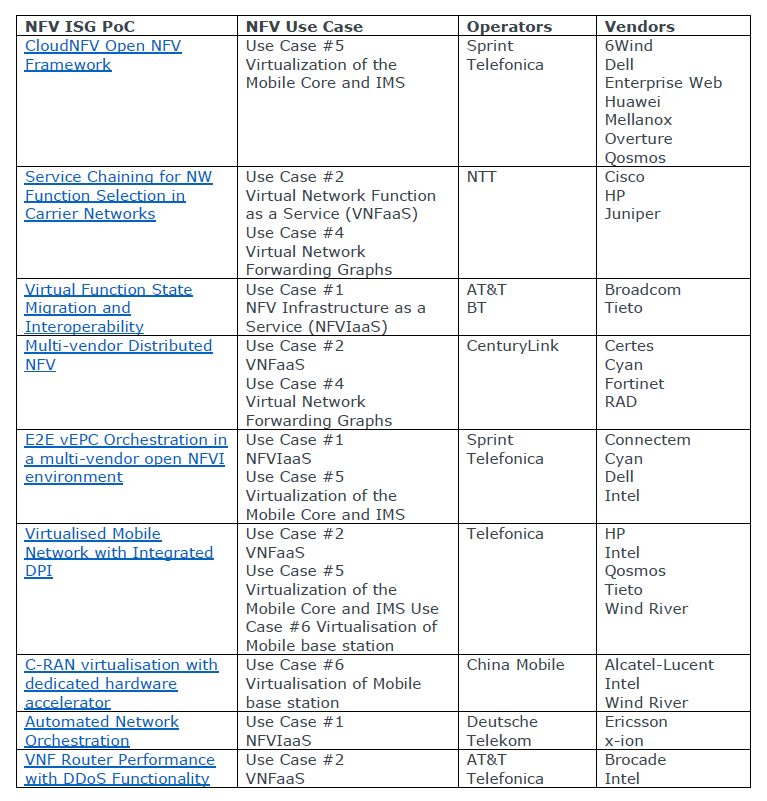 Many of the world’s largest carriers are participating in the public PoCs, including AT&T, BT, CenturyLink, China Mobile, Deutsche Telekom, NTT, Sprint, and Telefonica. A who’s-who of leading telecommunications OEMs, semiconductor manufacturers, and software partners are supporting the NFV PoCs as well.

"We are very pleased with the industry response to our global call for NFV Proof of Concepts," commented Don Clarke (BT), Chair of the NFV ISG Network Operator Council. "We are looking forward to more PoC proposals appearing during 2014."

An agenda item of particular interest to many pertains to the future of the NFV ISG. When originally formed in Q42012, ETSI stipulated that the NFV ISG assume a lifetime in 24 months, formally winding down in February, 2015 (after the NFV#9 meeting).

Uwe Michel (Deutsche Telekom) NFV ISG Vice-Chair addressed the plenary with initial thoughts on how NFV will progress in 2015 and beyond. Uwe noted "It is important to provide clarity to the industry on the plans to drive NFV implementation over the long-term."

A new NFV Steering Board (NSB) is proposed to replace the current working group structure to streamline the organization, decision-making and operational process. In addition, focused task forces are proposed to address specific tasks and rapidly produce results, in a departure from the traditional telecommunications standardization model.

NFV ISG NOC member Margaret Chiosi (AT&T) observed: "NFV must overhaul the traditional standards adoption process, which typically requires years before implementations are available. We are seeking a Fast Fail Forward model that enables standards and their implementations to be iteratively developed, similar to the highly-successful open source software model."

Technical coordination responsibility will be within the proposed NSB. Current Technical Steering Committee (TSC) Chair Diego Lopez (Telefonica) commented "It is essential that we leverage our strong core technical expertise and collaborative relationships cultivated in the ISG over the past year. Our charter will evolve to quickly address implementation and operational challenges."

Current TSC Vice-Chair Tetsuya Nakamura (NTT DOCOMO) also shared: "As NFV products and solutions emerge there will need to be greater attention to non-functional requirements, such as availability, scalability, portability, and performance. The TSC will play a vital role in coordinating such activities."

At the next meeting of the NFV ISG in Okinawa in May, the NFV ISG plenary will be asked to approve the future direction for NFV, which will be refined throughout 2014. While a number of valid issues have been raised, the proposal appears to offer a solid baseline for further discussions.

NFV is gaining significant momentum in the industry. In response, the NFV ISG has set an aggressive timescale to release the initial set of technical documents in November, 2014. With the involvement of the world’s leading operators and technology vendors, the prospects for success are very encouraging.

Marc Cohn is a Senior Director for Ciena’s Market Development organization, focused on Ciena’s SDN strategy. He also serves as the Vice-Chair of the Market Education Committee for the Open Networking Foundation, and is a Delegate in the ETSI NFV ISG. For over 20 years, Marc has driven and promoted successful communications software products for the Data Communications and Telecommunications markets as the industry was transformed by the IP revolution.