The ETSI NFV community met for its twenty sixth plenary meeting (NFV#26) from 20-24 May 2019 at NFV’s home, ETSI Headquarters, in Sophia-Antipolis, France. 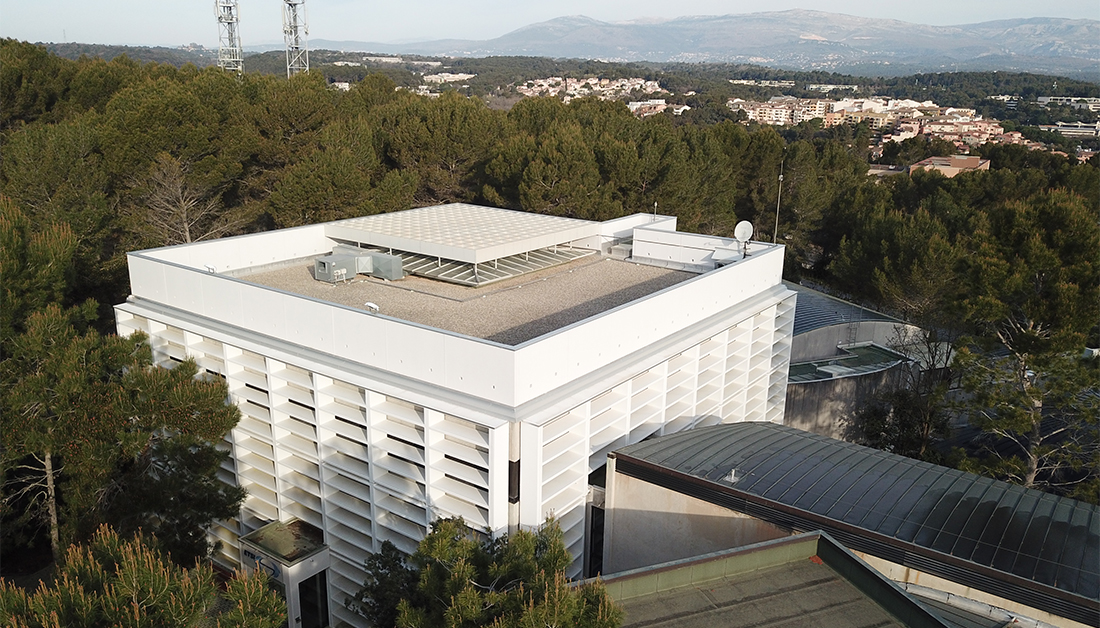 Visiting the breezy and sunny Provence and Cote d’Azur in May is always quite an experience. Many of our meeting delegates were greeted this time at Nice Airport, by photographers (and paparazzi). The reason for such a warm welcome might not be due to the Cannes Film Festival taking place the same week, but instead due to “our NFV stars” setting down, yet again, for another productive and successful meeting. 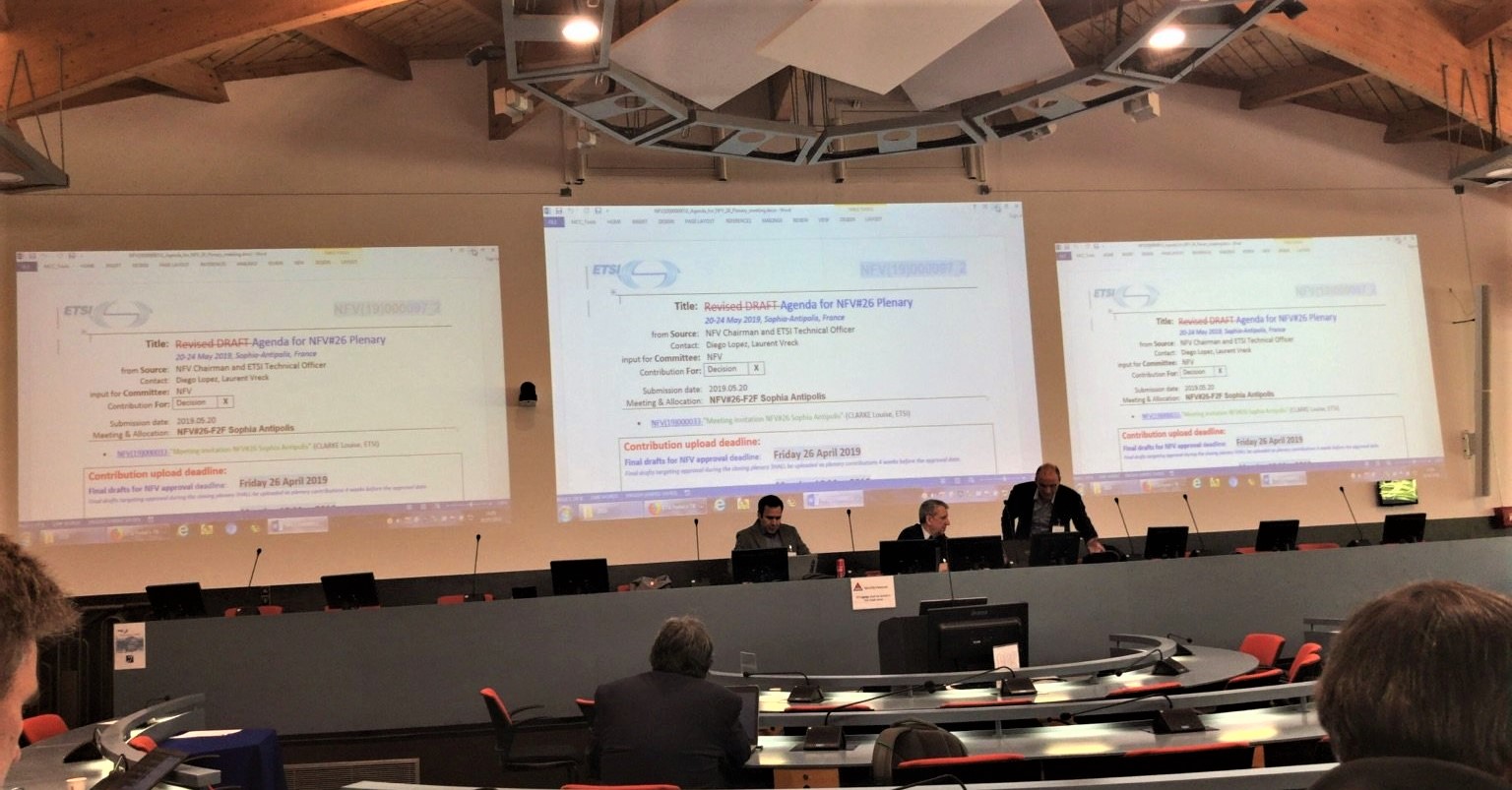 While the NFV#25 plenary meeting served as a warm-up for what would come after Release 3, NFV#26 should be forever remembered as the kicking-off of Release 4. Let me elaborate more on this.

According to the plan discussed at NFV#25 and during a subsequent online call, NFV#26 was going to be the starting point for the NFV community to begin discussing concrete technical focus and topics for the Release 4. Several new feature and enhancement proposals were received, together with a concise input from the Network Operators Council (NOC), chaired by Marcus Brunner (Swisscom). A special late afternoon-evening session took place during the plenary week. The floor was opened to participants to introduce the proposals and for all to discuss and share their ideas. It was reassuring to see how passionate the participating companies and delegates are for NFV to succeed in real commercial deployments and evolve NFV to address the demands of future network technologies.

Considering the input proposals and the discussion, the Technical Steering Committee (TSC), which I’m honored to chair, provided a strawman of the Release 4 definition of technical areas and features. This Release 4 definition is expected to serve as the genesis for the new work items to come, which will shape the ETSI NFV’s future work in the coming (I would say, at least) two years. As a summary, the Release 4 aims at delivering specifications within the following technical areas:

As you can probably see, the number of topics is quite broad and ambitious, even more considering that, unfortunately, a few of the features that were initially planned for Release 3 will not be ready and part of the work will have to be re-framed into Release 4. Overall, it is important that the ISG continues to deliver high value for the industry with ICT standardization addressing the needs for this new digital economy, and so the reason for such a Release 4 technical scope (new and not so new topics…).

Of course, the meeting did not focus only on Release 4 matters; the working groups and their members worked very hard the whole week addressing dozens of contributions for Release 2 maintenance and Release 3 work items.

The intensive work over the past few months materialized in some outstanding results. Since the NFV#25 plenary meeting in Beijing, China, in February this year, 23 documents have been published, among them 21 Release 2 maintenance and Release 3 stage 2 specifications. At this meeting, the Plenary approved the final drafts of the following documents, which will be published in the coming weeks:

As usual, anyone (e.g., developers, providers, operators, etc.) can access working drafts of ISG documents according to the open policy that the ETSI NFV has followed. All drafts are available on the ETSI NFV Open Area.

In this (not anymore) brief blogpost, I would also like to remark the very good progress achieved by our Specialist Task Forces (STF). Giacomo Bernini (NextWorks, STF557 leader) presented the progress and results of the STF helping with the "NFV API conformance test specification". The work delivered by this STF, in close collaboration with the Testing (TST) working group, is crucial to complete the full specification pipeline and be able to verify compliance of NFV solutions to ETSI NFV specified NFV-MANO APIs. The relevance of this activity was even highlighted by Silvia Almagia (ETSI CTI), when she reported to and updated the whole NFV community about the NFV Plugtests Programme for 2019, including the first "Remote NFV API Plugtest" held in the beginning of 2019, and the upcoming "4th NFV Plugtests". As a matter of fact, as we publish this blogpost today, more than 40 participating organizations, with input from 10 open source communities, are getting “dirty” running hundreds of tests during the "4th NFV Plugtests" at ETSI Headquarters, Sophia-Antipolis, France, from 3-7 June. More information about the NFV Plugtests Programme is available here.

It will be a busy summer for all ISG NFV working groups after the NFV#26 meeting. The next round of Release 2 maintenance is expected to finalize in the coming months. Currently, we are discussing concrete dates for freezing Release 2 work, on the grounds that we will soon start Release 4 work. And the next drop of Release 3 stage 2 specification outcomes will also be completed during this summer. The outcomes of the next set of Release 3 specifications (a big majority of them coming from the Interfaces and Architecture (IFA) working group) will freeze the feature set that will be part of Release 3. Our Solutions (SOL) and TST working groups will then have a hard task for the rest of this year, and maybe for some part of the next one, to complete the protocols, data models and testing of the specified Release 3 features.

Last, but not least, as a result of the recent elections that took place in between NFV#25 and NFV#26, I would like to welcome into the TSC two new members: Yoshihiro Nakajima, from NTT DOCOMO, as new ISG Vice-Chair, and Pradheepkumar Singaravelu, from Rakuten Mobile, Inc, as new Security (SEC) working group Vice-Chair. Our esteemed TST working group Chair and Vice-Chair, Pierre Lynch (Keysight Technologies) and Jörg Aelken (Ericsson LM) will continue as well for a new two-year assignment after their ratification before the Plenary during the NFV#26 meeting. Thanks all for stepping up and helping the whole NFV community with your activities and support!

This year ETSI NFV participants and members have the opportunity to visit four different places across two continents, following the respective plenary meetings settings. Next time, in September, we will move from the beautiful French Rivera and ETSI Headquarters to Paris la “Ville Lumière”. The next ETSI NFV plenary will be hosted by our friends in Orange at their beautiful “Orange Gardens” from 23-29 September. We are all looking forward to yet another successful meeting.

And without further ado, this blogpost comes to an end, not ending without first wishing you all a happy and relaxing summer.

Tweet
Tags:
nfv
SOL006 – NFV descriptors based on YANG Specificati...
Why We Must Act Now to Establish Standards for Qua...