NFV#22 – Reflections on a Remarkable Journey

As I flew to Sophia Antipolis for the twenty second plenary session of the ETSI NFV Industry Specification Group (ISG), I reflected how far we had come since publication of the now famous white paper introducing the NFV concept.

Until that moment in October 2012, the term “Network Function Virtualisation” did not exist, it had emerged from a meeting of the founding group in Paris in the summer of 2012 to distinguish the topic from SDN which by then was gaining momentum. We were all experienced telecommunications R&D leaders who knew that our goals were ambitious and would be highly disruptive to the industry, so we would need to be extraordinarily diligent to bring all the industry players on board, large and small, and with everyone able to be heard and to contribute their energies and expertise.

We chose ETSI to host the effort for many different reasons, but perhaps the most important ones were transparency of governance proven by many years of global standards development, and open membership for small players, especially independent software vendors whom we felt would be important contributors. We have never regretted the decision to come to ETSI who have provided fantastic support, and the rigorously consensus-driven decision-making process has kept us grounded. 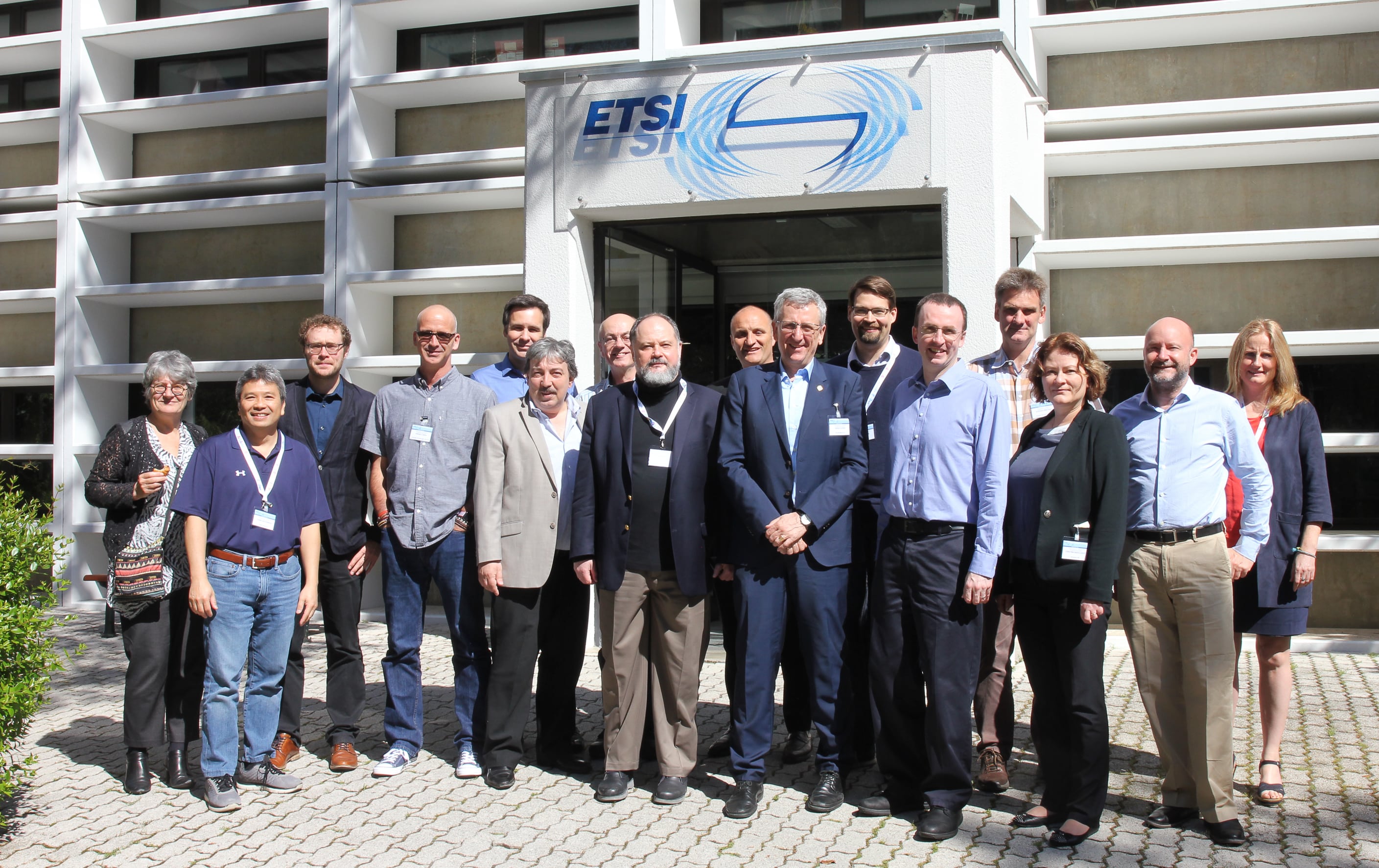 All of that seemed so long ago and I couldn’t have imagined that along the way I would move to the United States and start a new career in the cable industry while retaining my role as chair of the ETSI NFV Network Operator Council. After a 40+ year R&D career in BT, it was a seamless transition that was as unlikely as it was life changing for me.

Looking back over the past six years, there have been moments of great pride, such as when agreement was reached in a late-night session on the ETSI NFV Architectural Framework, interspersed with moments of doubt as strident voices from the world of software repeatedly criticized our efforts.

As with all things, time is a great leveler, five years on the NFV Architectural Framework has withstood the test of time and is being deployed at scale, and open source groups have begun to realize that the telecommunications networks environment is very different to the enterprise IT environment. Telecommunications networks are critical national infrastructures that underpin global commerce and security and as such demand analytical rigor and auditability that only implementations based on high quality specifications endorsed by the key stakeholders can provide.

Even as we took a page from the open source book and opened our draft specifications for external scrutiny and feedback and continually sought ways to speed up our work. And we founded OPNFV to enable open source groups to collaborate and provide feedback to ETSI NFV.

As I reviewed the NFV#22 achievements for this blog, I also reflected on how far we had gone beyond our original objectives. The founding group didn’t set out to produce standards, our primary objective was to converge global industry requirements for NFV and for domain-specific standards groups such as 3GPP, Broadband Forum, IETF, MEF, TM Forum, etc. to use them to evolve their specifications.

However, it soon became apparent that we were developing a body of work that would become the foundation on which future telecommunications infrastructures would be built. Hence, we needed to go the whole way to produce ‘Stage 3’ (i.e. implementable) standards including APIs and related artefacts, building upon the extensive body of ‘Stage 1’ and ‘Stage 2’ work that we had already published. Having produced implementable specifications, it was a natural next step to document best practices, foster proofs-of-concept, and organize interoperability events which ETSI calls ‘Plugtests®’ to help validate that our specs are fit for purpose. That ETSI has a dedicated professional team - the Center for Testing & Interoperability (CTI) - which organizes and hosts such events is another huge benefit of the ETSI umbrella.

Fast forward to the present. Since the last NFV#21 plenary session three new documents have been published: ETSI GR NFV-IFA022 on “Multi-site Connectivity Services”, ETSI GR NFV-SEC011 on “Lawful Intercept Architecture”, and ETSI GS NFV-SEC014 on “Securing the NFV-MANO Interfaces”. The Interfaces and Architecture working group (IFA) under the brilliant leadership of Jeremy Fuller whom we recognized with an award (on the right in the picture below) is on track to publish requirements, interfaces definitions and information models which address the following NFV Architectural Framework features:

As soon as this ‘Stage 2’ work is completed, the Solutions (SOL) working group will enhance the existing ‘Stage 3’ specifications to support these features, targeting publication by the end of 2018 as part of ‘Release 3’. 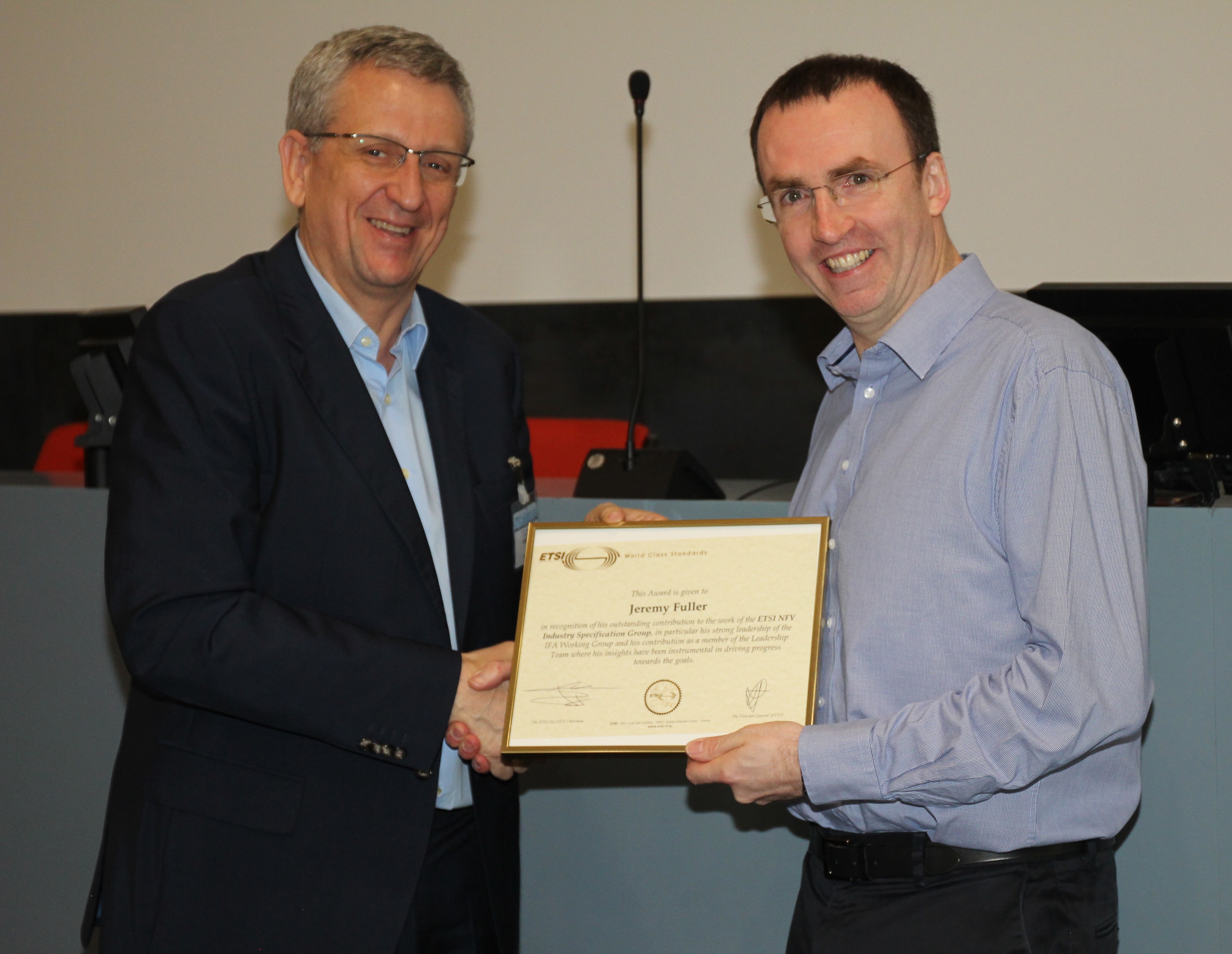 Typical ETSI NFV plenary meetings are characterized by parallel sessions of the various working groups, but this plenary meeting was notable for an increased focus on joint sessions. For example, the Reliability and Availability (REL) and Security (SEC) working groups joined IFA at different times to progress specification alignment. This joint working is very important to ensure that security and reliability are adequately supported in the architecture.

Given the continuing high volume of work and our desire to maximize quality of the NFV foundation specifications, we are resisting creating new work items unless they are helpful to implementation. Also, having in mind that other work items need time and efforts to be completed. As an example of completed work, the NFV#22 plenary approved the final draft of the specification of “NFV-MANO Performance Measurements” which will be designated as ETSI GS NFV-IFA 027. This document specifies metrics that can be collected and transported within NFV-MANO based on information collected from the NFV Infrastructure (NFV) as specified within ETSI GS NFV-TST 008 which was published in its first version in May 2017 and updated in February this year. This is part of an important effort to instrument NFV-based networks. Network instrumentation as a vital aid to fault management is a topic I have been passionate about throughout my career.

The current 2-year phase of ETSI NFV as determined by the ETSI Director General ends in January 2019. An evening plenary session was convened during NFV#22 to begin discussion on what should be the priorities going forward. It was agreed that we would request ETSI to grant a further 2-year term, and the Network Operator Council (NOC) which I chair issued guidance that taking feedback from implementation must be a high priority. This includes rapidly addressing bugs and ambiguities reported by implementers, and closing important gaps in the specifications identified by network operators who are in deployment. I have initiated follow-up NOC discussions to agree a more granular prioritization to be presented to the next plenary meeting which will be hosted by Ericsson in Montreal, Canada, in September.

ETSI NFV shows no signs of losing momentum, attendance at plenary sessions is stable - typically around 100 committed technical experts and membership continues to grow – now 313 companies including 37 network operators. Most importantly, global scale deployments of interoperable telecommunications infrastructures based on our specs are gathering pace and many new players are entering the field.

On the flip side, it does not surprise me at all that the NFV deployment pioneers are reporting painful experience integrating and operating this totally new way to implement telecommunications networks. This was anticipated at the very beginning and we reached out to every corner of the ecosystem, especially academia to create new curriculums which bring together telecommunications and software with a focus on practical skills. We reached out to software providers to create new tools including capabilities such as dynamic license management, and we actively encouraged systems integrators to position themselves to offer new products. It is especially gratifying that traditional telecommunications systems vendors have wholeheartedly embraced NFV and we are beginning to see exciting developments in their product roadmaps bringing together the best of networking technologies with the latest software technologies coming from cloud as we always hoped.

The upcoming ETSI NFV Plugtests events are going to be very interesting. If you are planning to participate, book your place early as the previous ones have been sold out!

Newcomers often do not realise that telecommunications is a long game because of vast geographic scale and multi-vendor multi-operator global connectivity, not to mention regulatory imperatives. As a result, waves of new telecommunications technology typically take 10 years to mature and services and interoperability must persist through each wave.

I like to compare where we are now with NFV to the Wright brothers learning to fly. The machine is by no means perfect, there is trial and error and pain, but there are so many innovations yet to come that no one will dispute that this was the right direction to go. We can’t foresee what our work will spawn any more than the Wright brothers could imagine me writing this blog at 38,000 feet over the Atlantic in a Boeing 787 Dreamliner, a marvel of automation that telecommunications can now aspire to reach thanks to NFV.

Tweet
Great strides made by technical brainstorming at Z...
What is Edge?

Guest has not set their biography yet