NFV#19 and the Specfest Concept 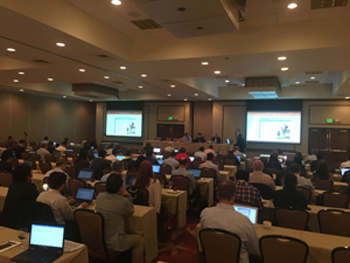 Last week in Denver, CableLabs hosted over 130 delegates from all over the world to the 19th plenary session of the ETSI NFV Industry Specification Group, the cradle and main playground for the Network Function Virtualization technologies that are bringing radical transformation to the telecommunications industry. With over 300 member companies including 38 global network operators, ETSI NFV is the leading forum developing the foundation international standards for NFV.

In 2013 ETSI NFV published the globally referenced Architectural Framework for NFV and over the past four years has been working intensively to specify the interfaces and functionality in sufficient detail to enable vendors to bring interoperable products to the market.

ETSI NFV has openly published over 60 specifications which define the functional blocks needed to deliver carrier-grade network performance in the telecommunications environment. Taking a page out of the open source playbook, ETSI NFV maintains an open area where draft specifications which are still being worked on can be downloaded enabling the wider industry to see where the work is heading, and for developers to prototype their code.

The ETSI NFV work is critical because it enables domain-specific standards bodies such as 3GPP, MEF and Broadband Forum to call out the same foundation specifications for solutions to be able to co-exist on the same virtualization platform. Open source communities also need to reference common specifications to avoid solutions which will not be interoperable.

An exciting development over the past year has been the ETSI NFV work to develop specifications for Application Programming Interfaces (APIs), and Data Models for the NFV Architectural Framework which has greatly accelerated progress on NFV implementation. For more details, see the previous blog post Bruno Chatras (Orange) NFV SOL WG Chair entitled “One more step towards NFV MANO interoperability”.

On the Monday afternoon prior to NFV#19 opening, we organized an NFV tutorial and hands-on demo session which we called a ‘Specfest’. The idea was to promote the demonstrations of running code centered on adherence to detailed specifications, and show that this could be as exciting as any other “hack-*” event. We had over forty live participants and more than that number used the remote participation facilities.

The NFV Specfest focused on demonstrating how OpenAPI definitions can be leveraged to foster the development, validation and adoption by the industry of the NFV REST-based API specifications recently delivered by the ETSI NFV SOL working group. Following an overview of the published specifications, the ETSI Centre for Testing and Interoperability (CTI) presented an introduction to the OpenAPI language and the set of tools available at the ETSI Forge to enable the development of OpenAPIs in a collaborative way with support for assisted editing, peer review, automatic validation, and more. This was followed by an interactive hands-on activity developing and contributing an OpenAPI definition via the ETSI Forge. As a case study for this activity, an example was selected from the actual VNF Lifecycle Management API, specified in ETSI GS NFV-SOL 002. The activity generated a high level of participation amongst both local and remote attendees, who managed to submit a high number of contributions in real-time. The hands-on activity was followed by a demonstration on how OpenAPIs can help the development of NFV solutions in practice. First, starting from an API example, it was shown how to generate a test suite enabling validation of NFV implementations for API compliance. Then, a live demo was run on an implementation of a Virtualised Network Function Manager (VNFM) provided remotely by Nokia. For those who missed the Specfest, it is still possible to participate by following the step-by-step instructions available in the NFV Specfest wiki, and the tutorial and demo materials are available for download.

Judging by the number of active participants, the quality of the discussion, and the fact that we saw the first public demonstration of running code implementing the ETSI NFV APIs made this event a real success. It is likely there will be more Specfests in the future. 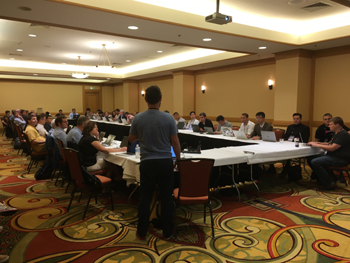 Coincidently there was an OpenStack Project Teams Gathering (PTG) taking place in Denver and it was too good an opportunity to miss to join up the two communities for a mutual update. Some ETSI NFV delegates and representatives of the NFV leadership team visited the PTG meeting site, so both groups exchanged ideas on technical issues and methods for collaboration. The technical focus was on the recently concluded analysis of gaps between ETSI NFV specifications on northbound interfaces of the Virtual Infrastructure Manager (VIM) [IFA005, IFA006] and the OpenStack Ocata APIs. Furthermore, the OpenStack Glare Project has expressed its intention to implement interfaces based on ETSI NFV specifications. ETSI NFV will help as much as we can to facilitate implementation of the related SOL specifications [SOL003, SOL004, SOL005]. 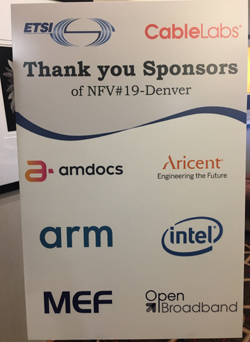 Both groups are performing activities around testing and CI/CD and can complement each other in this area. The need for further collaboration was recognized on both sides and ETSI NFV has started to investigate how to more closely collaborate with OpenStack.

The ETSI NFV working groups met in parallel throughout the week with over 230 contributions being discussed. Excellent progress was made in finalizing the upcoming specification releases and several new work items were approved related to the provision of connection-based virtual services, enhancements to the security of network functions and the packages used to distribute and onboard them, remote attestation of infrastructures and functions, management of identity attributes and their exchange, resiliency of network slices, and the application of YANG to NFV descriptors.

The next ETSI NFV plenary will be held in Sophia-Antipolis, on 4-8 December 2017 and we are planning ahead for the second ETSI NFV Plugtests event to be held at ETSI premises, on 15-19 January 2018. The first Plugtests were over-subscribed so you’d better register early!

Tweet
NFV#20 - The “landing” of NFV Release 2, and the “...
One more step towards NFV MANO interoperability