Highlights of the ISG#04 meeting

The fourth ETSI ISG NFV plenary meeting was held on the 30th October to 1st November 2013, in Sunnyvale, USA, and was kindly hosted by Juniper and co-sponsored by IBM.

A new ISG NFV record was set, seeing 350 delegates participating to the busy NFV plenary sessions. Indeed such is the popularity of the NFV meetings especially when held in Silicon Valley, that registration had to be capped. Growth of membership is still high, and 14 additional companies joined ISG NFV in the weeks preceding the NFV#04 meeting, taking total membership to 170 individual companies.

The fourth NFV meeting was characterized by a marked increase in the attendance by senior industry executives from ISG member companies. This can be seen as an indicator that NFV, and particularly the work of the NFV ISG is actively influencing product roadmaps across the industry.

Now that the five high level NFV deliverables have been published in October 2013 (see press release), the Technical Steering Committee (TSC) has agreed clear and ambitious proposals for the completion of the remaining ISG work over the remaining five plenary meetings before the end of the initial NFV ISG two year scope. 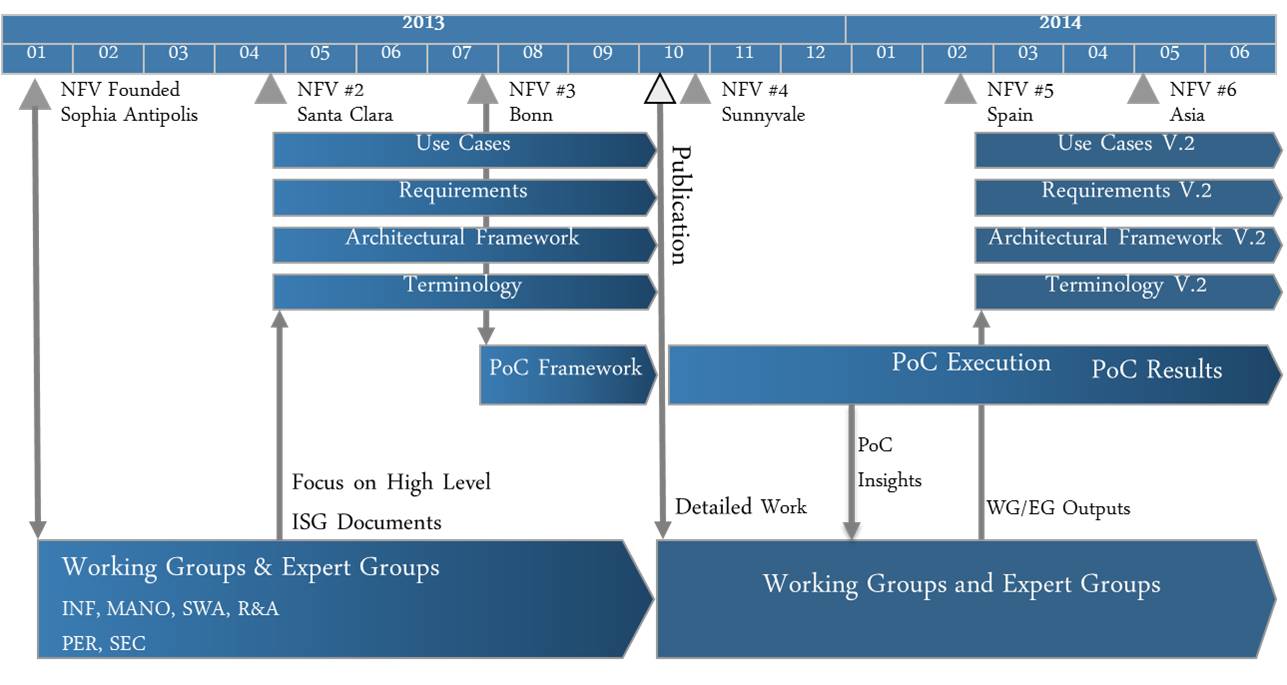 The TSC chair also presented the “Gap analysis” and the procedure for developing the document as contained in NFV(13)04_028. The gap analysis will provide a mapping of the WG tasks to relevant external bodies such as Standards Development Organisations (SDO) and open-source projects.

In their role of providing Operator advice and guidance to the ISG, the Network Operator Council (NOC) issued a formal reminder to the ISG that the working groups should focus their attention towards all of the reference points in the Architectural Framework with equal priority so that all possible deployment models can be implemented. The NOC also requested that the working groups agree on the definition and behaviour of the functional blocks in the Architectural framework while avoiding duplicated or overlapping functionality.

Throughout the week, the Working Groups and Expert Groups worked in both parallel and joint sessions in order to align their plans according to the proposed timetable issued by the TSC.

A plenary session was held specifically to discuss the NFV Proof of Concept (PoC) framework as contained in ETSI GS NFV-PER 002 V1.1.1. ETSI CTI also presented the NFV ISG PoC Page: NFV PoC where information about the framework, as well as past and present NFV PoC events will be stored.

The NFV ISG has an open approach to cooperation with other relevant organisations, and during the week the OpenDaylight Foundation presented a brief overview of their work as an open source, collaborative project under the Linux Foundation.
Other relevant open-source communities will be invited to overview their work in future meetings or via webcasts. NFV ISG is actively receiving and replying to Liaison Statements from other SDOs requesting interaction and information.
Output Liaisons from the meeting were approved to be sent to DTMF and NGMN. Another response LS to Apache CloudStack will be developed and approved by correspondence.

The ISG leadership has initiated consultations on how the industry can ensure that momentum on NFV can be maintained after the ISG completes the initial phase of work that is planned for completion in January 2015.
The initial draft proposals on continuation of the NFV work will be presented to the ISG membership at the next Plenary meeting in February 2014 and will then be further evolved over the subsequent plenary meetings.

By observing the packed meeting room, as well as the busy socializing activities, it was apparent that the NFV plenary has become an important networking opportunity where the industry may foster relationships and explore new partnership opportunities. This dynamic community has rapidly grown to become as important as the output deliverables of the ISG themselves and will need to be maintained and developed.

Overall the NFV#04 meeting was deemed by many as a great success, both in the consolidation of the work done to date, and also in setting the direction for the next steps of the ISGs evolution.

The ISG leadership wishes once again to thank the meeting participants for the active input to the NFV ISG meetings, and also thanked the host Juniper Networks and the co-sponsor IBM and the ETSI support team for the excellent levels of hosting & support provided to ISG NFV in Sunnyvale USA.

The next ISG NFV meeting will be held in Malaga, Spain on 19th – 21st February 2014. See meeting details.

Tweet
Video from NFV#4, October 2013 at Sunnyvale
Congratulations! You have successfully installed E...