AFI WG is driving a PoC Program on other various topics pertaining to the introduction of Autonomics in various network architectures and their associated management and control architectures.

TC INT AFI WG performed instantiation of the GANA Framework Standard (TS 103 195-2) onto various Architectures to introduce the functional blocks and reference points that are specific to enabling to implement autonomics (AMC) in the target architectures and their associated Management and Control architectures:

The gap we identified is on the need for a ”Test & Certification  Framework for AI Models for AMC (including GANA Cognitive DEs)” to support the Industry in implementing ETSI GANA Multi-layer AI Framework through our 5G PoC Demo series and the SDOs/Fora that are now leveraging the “ETSI GANA Framework”.

This is the reason why we created the newly launched standardization request (“AI in Test Systems and Testing AI Models”) to bridge this gap and answer this urgent need by delivering a full set of Deliverables on:

The diagram below depicts the structure of this new TC INT standardization request: 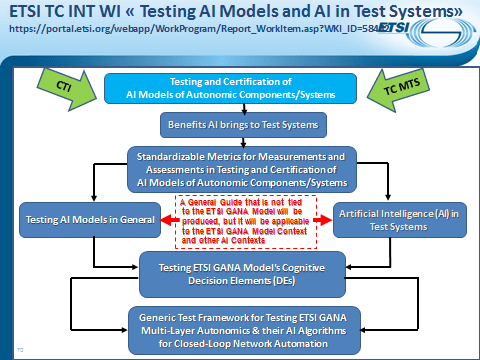 We shared this view with the ETSI Centre for Testing and Interoperability (CTI) during the TC INT#43, in September, and with TC MTS during the 7th UCAAT (Bordeaux, France) meeting where the new TC INT standardization request was part of a presentation on this topic “AI in Test Systems and Testing AI Models” and which identified the areas for joint collaborations with TC MTS.

Structure of the standardization request

This new TC INT standardization request was formed to overcome Technical / Operational and Regulation challenges linked to the development and deployment of AI exhibiting Systems such as GANA Components and Knowledge Plane (KP) Platforms for Autonomic and Cognitive Management and Control of Networks and Services (AMC), as Testing of Cognitive GANA DEs (as AI / ML Models) is becoming crucial. Various challenges need to be addressed in the lifecycle of such AI exhibiting systems with respect to the following systems engineering aspects “Development – Training – Testing – Certification – Deployment- Execution”.

Thousands of AI Models instances MAY simultaneously and concurrently be executed in operations and each enforcing a set of Business and Operational rules injected at the Governance interface as “Policy, Goals and Data Configuration” within a Blueprint / Design Template which includes a mapping table that respects the concept of “Managed Entities (MEs) Parameters ownership by specific DEs in One ME-Parameter-to-One DE Ownership relationship” and “Coordination among DEs to prevent conflicts that may happen” as described in TS 103 195-2.

Some of the Objectives of the WI include but not limited to the following: