ETSI NFV returns to Silicon Valley, in conjunction with the NFV/SDN community

Summertime is typically a time for holidays, family, and a break from the hectic pace of our professional lives. But not in Silicon Valley, where the 11th meeting was held for the ETSI Network Functions Virtualisation Industry Specification Group (NFV ISG). In fact, with the OpenDaylight Summit, MEF Quarterly meeting also being held in the same week, it remains as busy as ever.

It was fitting that Dell, Intel, Brocade, and Red Hat joined forces to sponsor the meeting, ensuring a comfortable and convenient venue for our global visitors and locals as well. Hosting the meeting in San Jose offered opportunities for a series of joint meetings with other key SDN and NFV industry groups and open source projects which prove to be instrumental towards progressing collaboration, NFV requirements refinement, and ultimately, adoption. 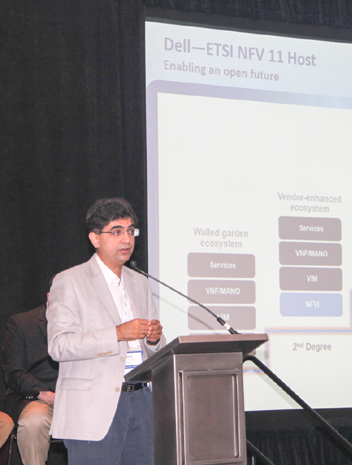 As was the case with the three preceding meetings for the NFV group held in Silicon Valley, turnout was among the highest ever (see Figure 2) as the NFV community continues to grow:

NFV ISG Chair Steven Wright stated “I’m encouraged about the significant growth of the NFV ISG and the NFV community. ETSI NFV ISG continues to play a major role in the evolution of NFV. From the beginning, we have embraced openness and collaboration with industry standards bodies, and open source projects as we strive towards expanding NFV adoption. ” 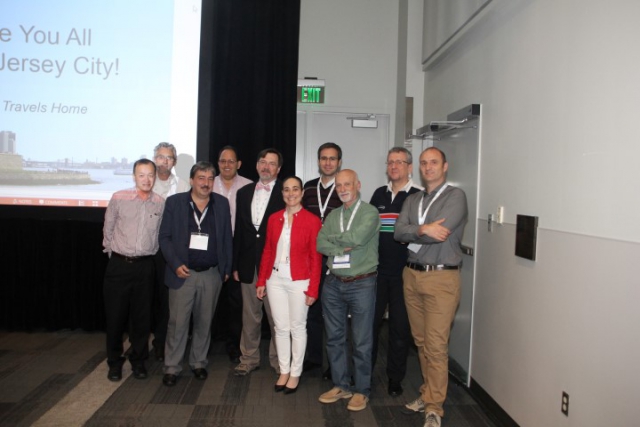 One particularly positive step adopted at the 10th NFV ISG meeting in Sanya, China, was a decision to make all NFV draft specifications publicly available to motivate greater industry-wide participation. Several documents have been posted for public comment.

The ISG took full advantage of its Silicon Valley venue to conduct a series of joint meetings with:

ONF Executive Director Dan Pitt commented “ONF remains committed to supporting the NFV ISG, which is especially important with the growing interest in Carrier Grade SDN. The joint work on Information Modeling, including TMForum as well, is especially critical towards achieving the degree of openness and extensibility our operator members (and the operator community in general) are seeking as they move to automate their network provisioning with SDN.”

Open Source is playing an important role in shaping and validating NFV. Meetings with OPNFV and OpenDaylight provide an opportunity to channel the collective operator voice to guide major open source projects. In the true spirit of collaboration, joint meetings were also held between OPNFV and OpenDaylight and ONF as well.

OPNFV and the ETSI NFV ISG are in discussions to prioritize and assess the target use cases that may guide OPNFV development, integration, and testing moving forward.

OPNFV Technical Steering Committee (TSC) Chair Chris Price (Ericsson) stated “The OPNFV NFV reference platform will enable operators to validate NFV use cases and deployments, refine NFV platform requirements, and solidify ties with related open source communities. It is important that together we converge on, and realize, common use cases that satisfy the needs of our industry.”

Neela Jacques, Executive Director of OpenDaylight, an open source SDN platform, further commented “We recently surveyed our user base to understand when and how they were deploying OpenDaylight in production, andNFV emerged as the top use case across telco, enterprise and academic/research institutions.Our membership of over 50 companies along with our growing community of more than 500 developers are committed to working with both the ETSI NFV ISG, OPNFV and others in order to enhance NFV by enabling SDN.”

In addition to the joint meetings with the other NFV/SDN bodies, the ISG presented the high-level 2016 release planning process, which will determine the priorities for NFV Phase 3.

Klaus Martiny, Vice-Chair of the NFV Network Operator’s Council, indicated “Our operators are highly motivated to work together on the priority features for the next requirements release. Many operators are basing their NFV plans on the outputs from the ISG; specific features validation in the broader community is extremely important.”

Looking beyond the current requirements release, the ISG held an evening session to discuss the future of NFV/ISG beyond its current charter, which expires at the end of 2016. Whereas the focus of NFV Phase 1 was on establishing the architectural framework, and Phase 2 was adoption and interoperability, NFV Phase 3 (beyond 2016) is aimed towards establishing an open ecosystem as NFV is deployed.

ETSI NFV ISG Vice-Chair Bruno Chatras observed “As NFV continues to gain traction, it will be increasingly important to foster a vibrant ecosystem, which was integral to our vision from the beginning. NFV vendors large and small are key to proliferating NFV deployments, and addressing gaps between the requirements and open source implementations.”

NFV continuing to evolve and mature, guided by real-world insights gained from the many NFV PoCs underway, which has yielded solid collaboration between operators and vendors. The challenge remains to validate NFV requirements through additional PoCs, and the open source reference platforms, such as OPNFV. This will in turn yield new use cases, further refining NFV requirements to ensure that other SDOs and open source projects can capitalize upon the NFV ISG progress.