ETSI hosted ENI#12 meeting and Proof of Concept (PoC) Demos in its headquarters in Sophia Antipolis, France, on 9-12 December 2019. The meeting can be summarized as follows:

On 9 & 10 December there were demos of most of the completed and progressing PoCs PoC#1, 2, 3, 4, 5, 6 & 7. This generated discussions and interest with other ETSI members and participants of meetings in the ETSI HQs at the same week. Especially, delegates from Industry Specification Group (ISG) Zero-touch network and Service Management (ZSM) and Technical Committee (TC) SmartM2M.

The meeting offered ENI delegates the great opportunity to work together with the delegates of ETSI ISG ZSM which addresses the application in networks of Artificial Intelligence (AI) technologies to obtain end-to-end control, management and configuration, with an end-to-end view that is complementary to ENI’s. 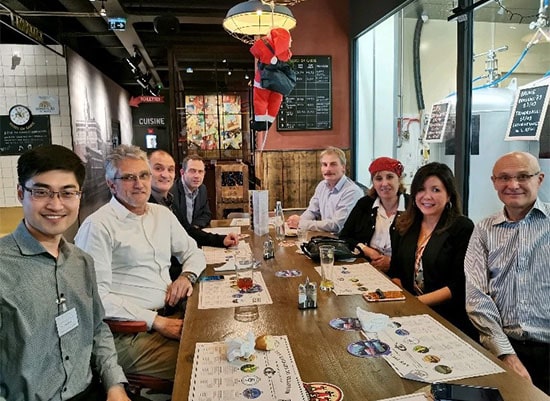 The ISGs ENI & ZSM had a dinner of the two management teams after an informative joint management planning meeting. A session was dedicated to joint discussion and to clarifying the mutual benefits from the work done in the other group for each of the ISGs.

The meeting was very productive and achieved significant progress. To sum it up, we progressed the standardization requests, especially the drafting of the deliverables ENI 008 on Intent Aware Network Autonomicity and ENI 009 on Data Classification mechanisms.

We made significant progress on the AI mechanisms addressed in the Architecture ENI 005 next revision, standardization request RGS/ENI-0016.

We continued revision drafting within the standardization requests for the next versions of ENI use cases, requirements and Terminology for release 2. In addition, we approved two new standardization requests on Evaluation and Network Configuration and Mapping. The new version of the PoC Framework document was declared as a stable draft and is therefore progressing towards final approval.

The setting up of an open area on the ENI portal was approved, where all publications, like stable drafts and drafts that need to be liaised to external bodies, will be placed.

In extreme summary, ISG ENI has now completed and published Release 1, and is progressing Release 2 as summarized in the following.

Work in Progress of ETSI ISG ENI in Release 2

Work has started on next releases of Use Cases (ENI 00), Requirements (ENI 002) and System Architecture (ENI 005), following the discussions in the ENI#11 meeting.
The Terminology ENI 004 was approved to be opened for revision in a new standardization request after publication and a new standardization request on big data and their classification was approved to start. The AI Network Categorization ENI 007 has been approved in this meeting and been sent to remote consensus, after which it is expected to be published, while discussion on a revision is ongoing.

The ISG is now fully focusing on the upcoming release 2.

The PoC description and presentation are available on the public ETSI ENI WiKi Pages (ENI Wiki).

ENI, as any ISG is open to ETSI members and non-ETSI members alike that have signed the Membership Agreement. The different players in the value chain are welcome to join the ISG effort, contribute to the development of these key specifications and demonstrate Proofs of Concepts (PoCs). To join, please contact: isgsupport@etsi.org

The ETSI ENI Industry Specification Group was created in February 2017. Today members come from operators, vendors and research institutes all over the world. Two awards were given for outstanding contribution, alignment and progress; Mr Antonio Gamelas & Dr Yue Wang were named. This will be annual with up to two awards. At the 4th annual meeting. This award acknowledges the contribution of all delegates.

The next ENI plenary meeting (ENI#13) will be hosted by ETSI in the ETSI HQs in Sophia Antipolis, France, on 16-19 March 2020. There is a plan to host a workshop with the ITU-T FG 5gML & SG13/Q20 on Monday 16 March. There will be PoC demos in the coffee and lunch breaks in the public areas of the ETSI Building.