Next month marks the two year anniversary of Network Functions Virtualization (NFV), which has taken the industry by storm and transformed the relationship between major operators and network standards.

As we plan to return to Germany next month for the SDN and OpenFlow World Congress, the event where the landmark NFV White Paper was published in October, 2012 and the ETSI NFV initiative was announced, many in the NFV community are reexamining a fundamental goal that has guided NFV from the beginning - Openness.

Openness means many things to different communities, as Matt Palmer summarized in his series: Defining Openness for Open SDN and NFV: A Primer for Network Operators.

This week the Linux Foundation announced the Open Platform for NFV Project (OPNFV), an open source software initiative intended to accelerate industry adoption of NFV. OPNFV intends to develop an ‘Open NFV Reference Platform’ that explicitly leverages a number of ‘upstream’ open source initiatives to catalyze and accelerate the development.

OPNFV is a new open source software initiative that aims to drive the evolution of NFV, through a reference platform in accordance with the ETSI NFV ISG Architectural Framework.

Figure 1 below illustrates the initial scope of the OPNFV initiative, relative to the ETSI NFV ISG Architectural Framework (specified in GS NFV 002). Specifics on the scope of the development projects are now being discussed in the OPNFV technical community. Like many other Open Source Software projects, released software will be made available through a common Apache License, Version 2.0. 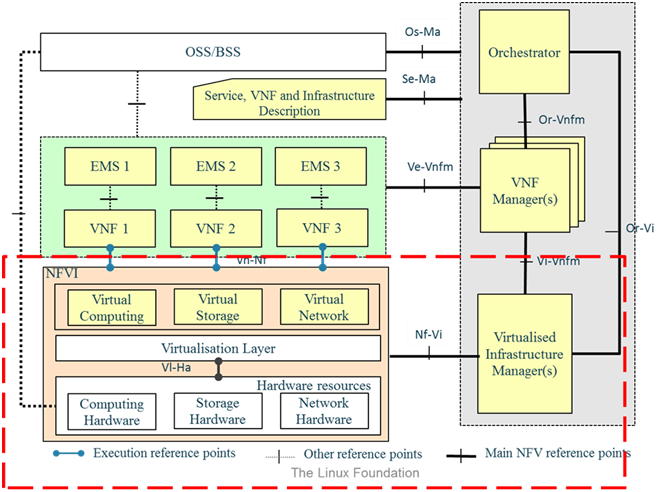 As a starting point, the OPNFV open reference platform could adopt several Cloud and SDN open source software projects, along with select proprietary components, including:

Over time, the list of open source projects adopted by OPNFV is expected to grow, as the scope of OPNFV steadily expands. From the outset, the OPNFV community intends to actively contribute to each of these projects to ensure they address NFV requirements and use cases.

How OPNFV relates to the ETSI NFV ISG

OPNFV has been established as an autonomous open source project by the Linux Foundation, similar to OpenDaylight, including a distinct governance, project leadership, and oversight structure. All technical decisions will be made by the OPNFV leadership, but will be influenced by the ETSI NFV ISG requirements and use cases, which have already been endorsed by the majority of the world’s network operators.

“I congratulate the OPFNV founders on the formation of this new open source community supporting NFV. The NFV ISG’s mission is to facilitate the industry transformation and development of an open, interoperable, ecosystem through specification, implementation and deployment experience. The ISG recognizes the value of open source implementations to converge industry requirements and facilitate the development of the NFV ecosystem. I look forward to the future releases of the integrated open source infrastructure platform from OPNFV.”
Dr. Steven Wright (AT&T), the newly elected Chair of the NFV ISG

“From the beginning, we have been encouraged by the strong industry support for OPNFV spanning the major operators, vendors, and individual contributors. We feel especially confident, considering the extremely well-defined NFV use cases and architecture framework that guide the OPNFV baseline. We anticipate a close working relationship with the ETSI NFV ISG, other open source projects and the entire NFV community.”
The Linux Foundation’s Executive Director Jim Zemlin

“The introduction of OPNFV is a critical step towards the long-term success for NFV. Open Source software projects have become increasingly important for all networking initiatives. We are excited about OPNFV’s decision to adopt OpenDaylight, which also emphasizes the importance of SDN as an enabler for NFV. Congratulations to each of the founding companies, many of whom already participate in ODL as well.”
Neela Jacques, Executive Director of OpenDaylight

"OpenStack is already addressing the growing needs of the NFV community, starting with our upcoming release next month. Our congratulations to each founding member of OPNFV for their commitment to facilitate new cloud services and software, a fundamental objective of OpenStack as well. We are excited that OpenStack was selected for the OPNFV baseline, and look forward to OPNFV’s contributions moving forward."
Jonathan Bryce, Executive Director of OpenStack

Unlike many open source projects, OPNFV was formed with substantive involvement from the stakeholders with the most to gain - the operators who anticipate deploying NFV over the long-term. OPNFV membership classes were formed to enable varying degrees of participation, including board representation for ‘Platinum Strategic End-User Members’.
Among the founding operators for OPNFV include:

“Industry response to the OPNFV has exceeded our expectations. Many of the initial OPNFV members are also active participants in the NFV ISG, which shows the industry is taking the next step - accelerating the implementation of NFV. The goal is to expand the user community to include users who may be more focused on implementation and software”.
Margaret Chiosi (AT&T)

“Leading operators participating in the ETSI NFV ISG believe that open source software is a critical success factor for development of an open ecosystem for NFV. I applaud the formation of the OPNFV project, and look forward to close cooperation towards achieving our common goals.”
Don Clarke (CableLabs), Chair of the Network Operator Council

As NFV Phase 2 continues to gain momentum, OPNFV has the potential to play an increasingly important role, enabling an open platform for NFV investigations to showcase/demonstrate select NFV functionality. Open source software will undoubtedly take on greater significance for the ETSI NFV ISG. OPNFV will likely pioneer open source development in the future, by aligning with the key stakeholders (i.e., ETSI NFV ISG), while encouraging participation by network operators. Ultimately, OPNFV aims to enable operators to focus on rapid delivery of differentiated services, and not be compelled to become enmeshed in the details of the underlying NFV Infrastructure.